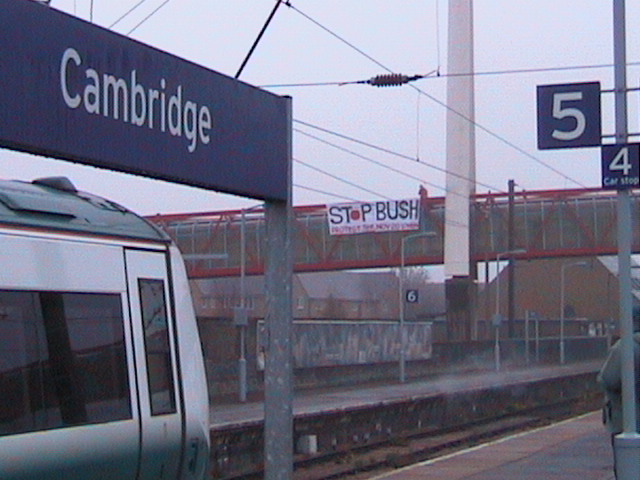 
Commuters at Cambridge railway station were in for a surprise this morning.
Thirty feet above the railway tracks, a Cambridge student climbed
on top of the largest cycle suspension bridge in the UK, and unfurled a
giant banner to draw attention to the state visit of US President George
Bush to London next week.

The twelve-foot-wide banner, hanging from the Carter Bridge and visible from
all around the station and the surrounding area, reads "Stop Bush".
One of the protestors said:

"We're here to remind people that next week actions like this will be
happening all over the country. While tens of thousands of innocent Iraqis
have died as a result of a 21st-century crusade, state honours are being
lavished on a man who has shown utter contempt for life, democracy, and
international law.

A warmongering US president wants images of adoring British crowds as
publicity for a failing re-election bid in 2004. The British people are
going to show him, by every peaceful means possible, that they have minds of
their own."

One commuter interviewed on the station platform said:

"Good luck to them! I marched against the war on February 15th, and nobody
listened. Bush's visit is a slap in the face to me and to the two million
others who marched that day."

1. George W. Bush will visit the UK between the 19th and 21st November. It
is the first state visit by a US president since Ronald Reagan's visit in
1982.

2. Cambridge groups are organising protests and street theatre in Market
Square on Wednesday 19th November at 1pm and 6pm. Cambridge Stop the War
Coalition have also organised coaches from Cambridge to the large
demonstration in London on Thursday 20th November.

3. On Thursday November 6th a panel of leading international lawyers met at
the London School of Economics to discuss the possibility of bringing
charges against Tony Blair and George Bush in the International Criminal
Court, for violations of the Geneva Convention.

4. The hollowness of George Bush's claimed intention to liberate the Iraqi
people is underlined by the US and the UK's refusal to write off the $383bn
debt accrued by Saddam Hussein's government, much of it owed to British and
US companies for sales of arms and other materials to the regime. The debt
will consume a generation of Iraq's oil sales.

5. Today's protestors were wearing orange jumpsuits like those worn by the
662 prisoners currently held at Guantanamo Bay in Cuba. Detainees, including
British citizens, are held without rights to civil trial or appeal. On
October 11th, a report of the International Bar Association condemned this
violation of international law, saying: "States cannot hold detainees, for
which they are responsible, outside of the jurisdiction of all international
courts."