Extensive coverage of the End The Occupation Rally 27 Sept 2003 in London. Includes the full speeches in real audio of around 30 speakers plus lots of photos, etc. 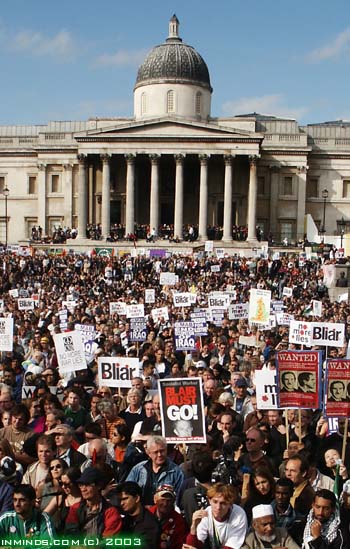 The third anniversary of the Al-Aqsa Intifada saw over 100,000 ordinary people of all faiths and races on the streets of London marching in support of Palestine and against the occupation of Iraq.

The day was also important because the next day was the start of the Labour party conference. The prime minister Tony Blair had already declared that he didn't want the invasion of Iraq to be mentioned at the conference so the rally took on the extra responsibility of voicing the peoples views on the occupation of Iraq and the wall of lies surrounding the reasons Britain went to war.

It was jointly organised by the Muslim Association of Britain,, Stop the War Coalition, and Campaign for Nuclear Disarmament(CND).

The march set off from Hyde Park down Park Lane to culminate in a rally at Trafalgar Square. Around 30 speakers addressed the rally, we have most of the speeches, around 2.5 hours worth, available on this page in real audio format (both for listening and downloading).

Speakers included the regular favourites as well as many new and important faces.

George Galloway was on top form as he described Tony Blairs decision not to discuss the war at the party conference: "Its like having an elephant sitting in the corner of your living room and not being prepared to mention it". And he had a suggestion about this years bon fire night: "Guy Fawkes who's had a hard enough time all these centuries - after all he wasn't the only man to enter parliament with bad intentions, lets replace Guy Fawkes on the top of those bon fires with George W Bush and Tony Blair!".

Tony Benn described Trafalgar Square as "the real parliament of this country".

Ken Livingstone, the popular Mayor of London, spoke of Sharon: "Sharons hands are covered in blood - the blood goes up to his arm pits! He has had fifty years of slaughtering Palestinians."

Dima Tahboub, the wife of the murdered al-Jazeera journalist Tareq Ayyoub gave a very emotionally charged address - many both in the crowd and on the podium were reduced to tears as she described her life without Tareq, and the double standards which meant that his killers - US soldiers - would go unpunished: "what I'm supposed to tell my two year old daughter Fatimah? Am I supposed to tell her that the people who killed her father were never brought to justice and were probably awarded military honours for their performance during war?"

Sophie and Billy Hurndall spoke of their brother Tom who was shot in the head by Israeli soldiers. Billy described his own visit to Palestine, "I travelled to Palestine - I wanted to find these answers for myself. In short, I found the answers that I feared. Palestinian blood spilt, quiet often at the hands of laughing Israeli soldiers". He castigated the media for betraying the British people by concealing the truth about Palestine.

Eleven year old student Rosana spoke of how she wrote a letter to her pro-war MP asking him how he would feel if someone bombed his home and killed his family and friends.

Azzam Tamimi, the spokesperson of the Muslim Association of Britain, warned the European Union to stop encouraging Sharons butchery by giving him green lights: "when the European Union proscribed Hamas as a terrorist organisation. Immediately afterwards, within the hour, israelis sent their f16s to assassinate Sheikh Ahmed Yasin and hell broke again".

Ismael Patel from Friends of Al-Aqsa talked of the need to "dismantle" the "discriminatory ideology" zionism and "de-zionise Israel".

Film maker Ken Loach responded to the announcement that the US provisional authority are to sell off 192 publicly owned Iraqi companies: "they smashed the shop front and now they are reaching in and grabbing the jewels! I think we cannot oppose the war unless we oppose corporate power at the same time - its one and the same issue!"

Campaigning journalist George Monbiot warned against replacing US troops with UN troops in Iraq. He said "the best place for the US armed forces at the moment is pinned down in Iraq because while they are stuck there they can't go on and invade anywhere else!".

The London rally was not alone, similar demonstrations on the same day took place all across the world with huge turnouts in Spain, France, Italy, Greece, Austria and South Korea..