All over America, big billboards and loud television commercials are telling Americans "Don't be afraid, be ready." Americans are told to call 1-800-BE-READY or to go to www.ready.gov. This is a review of that website "by a raving radical," according to the L.A. IndyMedia. 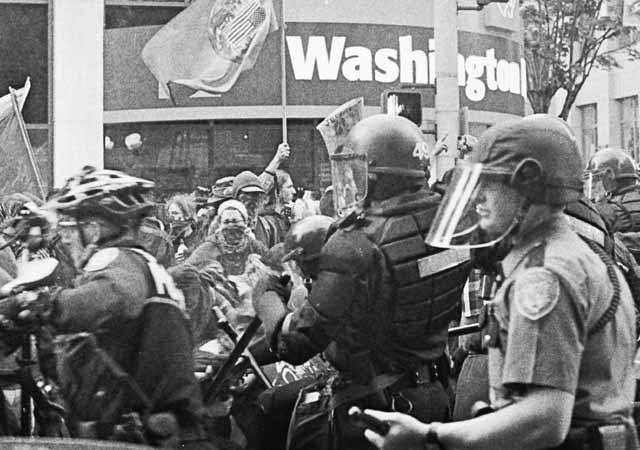 I want to be ready! So I took the advice of all those ads on TV, billboards and in newspapers all over America, and went to www.ready.gov (1-800-BE-READY). What I found there was a treasure trove of information we all need to be READY for. The site's "mission statement," is "Terrorism forces us to make a choice. Don't be afraid...be ready." This site is "sponsored by the US Department of Homeland Security." Humorously, on the home page, is a button that offers you this page in "additional languages," meaning apparently any languages other than English and Spanish. When you hit it, it says "additional language versions of the site are currently being developed and will be available soon."

The homepage has information about preparedness for many disaster scenarios, including biological, chemical, and radiation threats, as well as nuclear blasts and explosions. For instance, you are told not to shout in "explosion" situations, as it causes you to inhale dangerous amounts of dust. For "chemical" threats, they suggest you use dead and sick birds, fish and small animals as your indicators of danger. For "biological" threats, they suggest you stay informed via "official news" on the TV, radio, and the Internet. For "nuclear blasts," they suggest taking cover underground, and using thick shields for radioactivity protection. My favorite advice was for the nukes and radiation: "If you do not have a car, plan how you will leave if you have to." I lived in the San Fernando Valley in 1971 during the Sylmar Earthquake that broke the Van Norman Dam. 80,000 people had to immediately be evacuated from the Valley floor. The National Guard had to come in with truckloads of gas and it was insane, just to give you an idea of what we are talking about here. I believe Seattle's emergency nuke plan on record for FEMA is, and I am serious, we all are loaded onto buses and driven north!

Besides the obvious links that this ready.gov site would have to the Red Cross, local, state, and federal Emergency Management Agencies, there were some new agencies linked that warranted further exploration. I was particularly interested in the links to the "USA Freedom Corps," and the "Citizen's Corps." It appears George Bush has been creating insane amounts of new "volunteer opportunity" agencies and agendas since 9/11, to encourage and reward average citizens for becoming little spies on each other in America today. The "USA Freedom Corps" was created by, and is currently chaired by, George W. Bush. It was launched in January 2002, and calls itself the "largest clearinghouse of volunteer opportunities ever created." The USA Freedom Corps website (www.usafreedomcorps.gov) says, "federally funded Peace Corps, Americorps, Senior Corps, and Citizen Corps are part of the USA Freedom Corps." Their site also says "more than 140 businesses and business organizations, that employ more than 2 million individuals, have joined the Business Strengthening America Program," whatever the hell that is. As I researched this article, it got to be hilarious keeping up with all these new titles Georgie loves to pin on everything he touches! Each time George W. visits a community outside Washington DC, the site touts, he meets with a local volunteer with a record of service. Since March 2002, Bush has met with 140 "dedicated volunteers" from 36 states. This year's "areas to be addressed" by the USA Freedom Corps are "youth achievement, parks and open spaces, healthy communities and homeland security."

I continued on, past surreal links to www.studentsinservicetoamerica.org, www.nationalservice.org, www.networkforgood.org, the Points of Light Foundation, www.idealist.org, and my favorite, www.ourdocuments.gov, created by George W. on Sept. 17, 2002. Also of interest was www.volunteer.gov, where you can post your record of service, in response to Bush's "call to service." I stumbled upon "The Citizen Service Act," created by George W. on April 9, 2002. As well as the "President's Council on Service and Civic Participation," formed in 2003. All of the above information was from my journeys to ready.gov, and then to usafreedomcorps.gov. But I still had not explored www.citizenscorps.gov.

The Citizens Corps homepage says "Americans are now volunteering in police departments through more than 320 Volunteers in Police Service programs." Yes, 320 "Police Service Programs"--that is what it said! The site continues, "The number of Neighborhood Watch groups has more than doubled," and "Doctors and nurses are joining the Medical Reserve Corps units across the country." 300 Citizens Corps Councils are up and running in the US, they boast. The Federal Emergency Management Agency (FEMA) created the National Citizen Corps Council in December 2002. The www.citzenscorps.gov site offers useful information, such as dimensions for emergency community shelters. For example, they suggest the following squared dimensions per person for tornado shelters: 5 ft./adult standing, 6 ft./adult sitting, 5 ft./children under 10, 10 ft./wheelchairs, and 30 ft./bedridden. They suggest one toilet per 75 people... Not to be distracted by the emergency info, there is a police state overtone to the Citizens Corps that is noxious.

In the last few years, George Bush has created the USA Freedom Corps, the Business Strengthening America Program, www.ourdocuments.gov, www.volunteer.gov, The Citizen Service Act, The President's Council on Service and Civic Participation, 320 Volunteers in Police Service programs, the National Citizen Corps Council and 300 Citizen Corps Councils, and much, much more. Now if Bush can finally create the USA Free Speech Corps, the Worker Rights Strengthening Act, www.empowerment.gov, www.universitiesforthepoor.gov, The National Police Accountability Act, The National Eliminate Homelessness and Hunger in America Corps with 300 chapters, maybe then we will feel and be "ready." But ready.gov just made me feel sick, not safe.

To be perfectly honest, as an American, I am more afraid of US Homeland Security and Seattle riot police than I am of terrorists from abroad. It was the Seattle police who pointed machine guns at peaceful protesters, myself and son included, in front of my own eyes and denied it, twice this year so far, not foreign terrorists. The Seattle police somehow got away with the WTO riots in 1999, without reprecussions. I have attached a picture of Seattle police beating peaceful protesters on June 2, 2003. Police who are supposed to be protecting us in Seattle, attack us in Seattle. The police show up with CHEMICAL WEAPONRY AND RIOT GEAR! The riot police come with violent intentions, and police are PREPARED to riot, NOT the protesters! So, I am definitely not going to be afraid, and I am going to be ready, as my American duty, you bet. They convinced me!

I think the fact that the US government uses the top level domain of .gov rather than .gov.us says it all really.