Letter from America - THANK YOU FOR YOUR PROTESTS!

I am an American activist who is appalled by our President Bush, and am writing to support your Bush protests from America. I saw Bush on American TV last night. An announcer from the UK said he had never seen this much vehemence towards a U.S. president in the UK EVER. Bush's response was that he was HAPPY to go to a country where protest/free speech was openly embraced and allowed. The hypocrisy here is unbelievable. 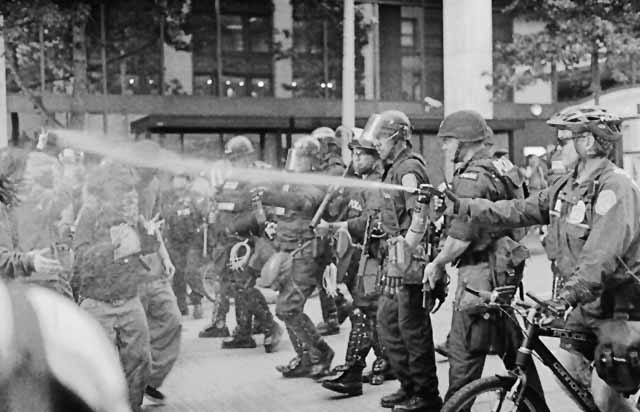 I am an American activist who is appalled by our President Bush, and am writing to support your Bush protests from America. I saw Bush on American TV last night. An announcer from the UK said he had never seen this much vehemence towards a U.S. president in the UK EVER. And they announced the protests coming, due to Bush's appearance in the UK. And Bush's response was that he was HAPPY to go to a country where protest/free speech was openly embraced and allowed. The hypocrisy here is unbelievable.

I was one of the people George Bush's American Homeland Security program and Seattle's notorious WTO-fame-police RIOTED ON in Seattle, Wa. the week after Bush announced this Iraq war in March 2003. I was one of hundreds of protesters who had machine guns (AK-47's) aimed at us, less than a foot from our bodies, and snipers from roof tops across the street aimed at us for peaceful protest. Hundreds, if not over a thousand, riot cops dressed up like Darth Vader, with huge riot sticks pounding in their hands anxiously, ready and willing to kick our asses, attacked us for no reason. We had riot cops swarming our Federal Building area, and these cops were literally HECKLING US for our politicial views. We had obtained legal permits to protest there for the week, yet they brought in cops from every local precinct, they brought in HOARDES of FEDERAL RIOT POLICE to terrify us and try to discourage further protest. The streets were crawling with shiny black cars, with blacked out windows, with government agents clicking our pictures, as well as police vans, and empty transit buses waiting in cordoned off areas. Seattle has laws that say the police must always have 12 point name tags on the uppermost torso area on the outermost layer of clothing AT ALL TIMES, that they must identify themselves and their agencies when asked, and that they may not take that as undermining their authority. Yet hundreds of Robocops lined our streets for 5+ days without proper identification, they would not speak to us when we asked them anything, including their name, agency, or what they wanted us to do to stop their rioting. The Police Chief and Mayor were made aware of these violations early on, and allowed this to continue all week. So we had to write physical descripts of those cops beating protesters! And we did. We also took pictures of it all. Then the Mayor of Seattle and The Seattle Police Chief went into the Seattle media in the days after this and claimed there were no machine guns, no snipers, they even said there was no riot gear! These violations were all reported to the City of Seattle's Safety Commission, as well as the Office of Police Accountability, and no action has been taken to reprimand anyone so far, and no one I knows feels our complaints are being taken seriously. It has been appalling.

The Seattle Police rioted on innocent, nonviolent protesters, without name tags, without shame, again, on June 2, 2003. We had the audacity to publicize the existence of the American LEIU, Law Enforcement Intelligence Unit, a shady cop organization that uses inside information trading to skirt Freedom of Information and civil rights/spying laws in America. When we orgainzed an outing of that organization, holding its national convention in a downtown Seattle hotel, we were met by violent robocops, I have attached a picture of the LEIU riots in June. Again, we had obtained all the proper legal permits for this rally and march, and protesters were nonviolent. The police tried to lie again about their violence, but this time, we had every major newspaper in town on the scene, and when police sprayed the local press head on, that appeared on the front page of our local mainstream papers. The local press got footage of the machine guns. Finally the police admitted they are using the AK-47's. Apparently Seattle is one of 8 cities in America chosen by Homeland Security to receive millions of dollars in weaponry, security monies, etc. as "protection" from terrorists. Well, from what I can tell, the first two times they have used that weaponry on people directly, have been on American citizens, not foreign terrorists, at anti-war protesters in March and the LEIU protesters in June. Our mayor and police chief lied to me this year, after police most certainly broke laws in front of my own eyes. Our last local Tacoma Police Chief ADMITTED he raped a woman to other Tacoma police officers, and they still promoted him to become Police Chief, until he finally shot himself and wife in a rage in front of his two children since she had filed for divorce. So, this is the calliber of integrity we are dealing with on the streets. A local jail guard for 20 years just got busted for one of the most heinous rape/torture cases in our local history. Another cop, in uniform, just got caught peeping into a couple's bedroom window. And there was the guy who was taking people's drugs on the street in return for him letting them not be arrested! It is gross. And these guys do not all of a sudden become angels once on the street, anonymously in riot gear, rabid with anger at our political views, not to mention avidly HATING American free speech.

So, let me tell you, you are doing us a service by protesting over there. It is damned dangerous to protest Bush here in America. We get beaten, attacked, assaulted, heckled, falsely imprisoned, and terrified as Americans by Homeland Security and local riot police forces nationwide, trying to voice our revulsion at Bush's international policies and his sick oil wars in nonviolent protest...but we continue to protest anyway. We have formed STREET MEDICINE ORGANIZATIONS to respond to this violence by American police on nonviolent protesters. It is going to happen in Miami this week, as a matter of fact, this American people versus violent riot police with chemical weaponry, at the FTAA protests. The world cannot tolerate another four years from George W. Bush as the President of America. And if we need to be beaten for our free speech rights in America, we will be beaten. But you all need to know that we are getting hurt in America protesting this clown's policies. After the Iraq war was declared in March 2003, the police used the same containment tactics in several cities for the protests. Many major cities including Oakland, some east coast cities, and Seattle, were subjected to containment tactics. In Seattle, protesters tried to have a peaceful march on 1st Avenue on March 22, 2003. But the police blocked the front end, then blocked off the back end, then blocked off all side streets and kept us in the area, did not ask us to disband, gave us no warning whatsoever, and all of a sudden we were surrounded on all four sides by faceless robocops without badges or nametags, who would not speak to us, and beat baseball bat sticks in their palms in rows as they marched at us, beating people. We could not leave. And we had this containment on June 2, 2003 also, as they drenched us in pepper spray and shot us with concussion grenades in a zone we could not leave from. Both times they trapped us, would not let us leave, then attacked us with chemical sprays, rubber bullets, AK-47's, concussion grenades, etc. And when the police tried to say they did not use certain weapons, well, activists collected the trash the riot police left on the street after the riot as evidence, and I suggest all protesters do that. Return to the scene of the crime and get all evidence of cop weaponry used off the street you can find. (Use gloves, they are toxic).

So put on a good show for us over here. It may be safer to protest Bush outside of America, since perhaps your government agrees he is horrific. Our government is run by him, so they terrorize us with robocops when we complain here in America. Do not believe America is having free speech right now. We are PAYING for our free speech, that is for sure, and I am not sure this is free speech at all. I have written several articles about these riots, and what you can do to be safer at police riots. You can visit a street medicine article at

I just saw someone hanging an upside-down American flag on the gates to Buckingham Palace on the local Seattle news. GOOD WORK! We are watching, and our hearts are with you!