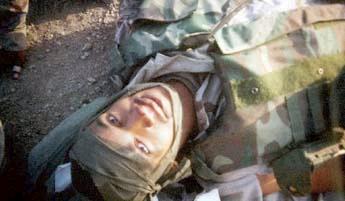 ST. PETERSBURG - His mother mailed disposable cameras to him in Iraq and told him to snap pictures of everything. But she didn't imagine this.

Inside her house in St. Petersburg, Army Spc. Willie Turner III pulls out photos of his personal journey of war. He shows them to visitors.

One shows a 5-ton M923 truck with flat tires, its body misshapen by an Iraqi bomb blast. Another shows a victim of that blast: Turner himself. In it, he wears a bandage around his head and a smile that seems out of place.

All this, he said, explains why he doesn't want to get back on that truck.

Turner, 21, a graduate of Lakewood High School, was home last week on emergency leave after the death of his father.

Thousands more soldiers are flying back from Iraq to the United States for the largest military leave program since the Vietnam War. They are enjoying whirlwind vacations designed to boost military morale in hometowns from Tampa to Tacoma.

But the number of soldiers coming home presents the military with a new challenge: What if some of them don't want to return to duty?

One month ago today, on Oct. 17, Turner sat on the passenger seat of a truck while another soldier drove. A third soldier sat atop the truck behind a .50-caliber machine gun. Turner said the silent prayer he repeats on most days in Iraq: Please, God, let me make it back today.

Their mission was to drive in a convoy from Tikrit to Kirkuk in northern Iraq. The mission of the soldiers on Turner's truck was to bring back another truck that had been disabled by what the Army calls an "Improvised Explosive Device" - in other words, a bomb. These are common enough that soldiers sometimes keep sandbags on the floors of their vehicles in case someone detonates one underneath, he said.

Turner got nervous when he learned his truck would bring up the rear of the convoy. He said Iraqi fighters often attack the last truck.

"I was wondering if we were going to get home safe," Turner said. "I was kind of dozing off, and I just leaned over to look out the side and it was like a big bomb. Next thing I knew, I saw the sandbags on the floor coming up to my face. Flames started coming up."

He woke up on the ground, thinking only a second or two had passed. When he saw an M-16 rifle on the ground next to him, he lurched forward to grab it, ready to fire back at the Iraqis. But the weapon belonged to a medic who had been assisting him for five or 10 minutes, while he was unconscious.

The blast - another bomb, he said - had thrown him and the other two soldiers from the truck. He felt blood running out of his nose and pain in his back and right foot. Deafened from the blast, he couldn't hear his sergeant talking. The soldier on top of the truck was hurt the worst and had to be hospitalized, he said.

Afterward, Turner got a few days' respite and was told he would be put on a list for "rest and recuperation" leave in Italy.

Many soldiers who are serving for a full year in Iraq and other Middle Eastern countries are eligible for a 15-day R&R leave. Some go to Europe; others come to the United States. The number of soldiers coming back to the United States was as high as 479 per day earlier this month, according to U.S. Central Command.

But the promise of leave did not end Turner's troubles. On Oct. 23, six days after the bomb blast, his father, Willie L. Turner Jr., died of heart disease. Turner had known his father was sick and had wanted to return home earlier.

"I was crazy when they told me," he said. "I cried. My first sergeant calmed me down."

He flew into Tampa a few days later, after being granted emergency leave. He attended his father's funeral Nov. 3. Wanting to get the most out of his leave, he tried to put his grief aside and visit friends, spend time with his mother and stepfather, eat fast food, play PlayStation 2 games.

He said he still aches. To meet a recent visitor, he walked into the driveway with help from a cane. He can walk without it, he said, but his foot gets too painful and he needs to sit down. But he said a military doctor who examined his foot couldn't find anything wrong with it.

All this time in St. Petersburg, Turner had a thought in the back of his mind: His orders said to go back to Iraq; he didn't want to.

In interviews last week, Turner sounded of two minds about returning to Kirkuk to resume duty as a truck driver for the 501st Forward Support Company of the 173rd Airborne Brigade.

He said that, in many ways, he enjoys military life: "It's better than the civilian life. There's more disciplined people. Everything is organized. It's what you make of it."

He said that if ordered to resume duty on the truck traveling through Iraq, "I would have to refuse, and if there are any types of consequences for it, I'll have to take them. I'd still be living, I'd have my health."

He said he hoped to be reassigned to Italy but could see himself returning to Iraq. But if told to ride out on a similar mission, he said, "That's a life and death situation. ... I won't give them another chance to kill me. It's just lucky I lived through that. I believe that was a sign. Why risk my life again?"

Military officials could not be reached Friday for comment about Turner.

Turner said Wednesday that he will be flying first to Italy, a plan approved by his sergeant, who also is there on leave. Turner expected to return to Iraq but said the sergeant was going to inquire about transferring Turner to Italy.

He flew out from Tampa International Airport on Thursday, not knowing where he will end up.

The military is aware that when soldiers return on leave, it can create not only joyous reunions but wrenching good-byes.

In a highly publicized case, a 30-year-old Colorado woman who is a National Guard medic refused to return to Iraq after an emergency leave she received because of a custody battle over her children. Spc. Simone Holcomb, 30, was later reassigned to Fort Carson in Colorado, but faced the spectre of a court-martial until Friday, when the Army said she will not face criminal charges or disciplinary discharge.

But the vast majority of soldiers return as ordered. That includes Spc. Willie Todd Harris, 30, of the 3rd Battalion of the 124th Infantry Regiment of the Florida National Guard - even though he knows the dangers of war.

In Iraq, Harris and Mark Ballou, 24, of Valrico, were standing guard outside a bank when an Iraqi with a 9mm handgun began firing. A bullet struck Ballou in the neck. Harris said a bullet struck him on his flak jacket.

"I just came out with a pretty nasty bruise and a cut on my chest," said Harris, who normally works as an officer at Gulf Correctional Institution in north Florida.

Harris fired back and killed the Iraqi.

On a two-week leave in late October and early this month, Harris enjoyed grilling outdoors, sipping a few cold beers and spending time with his wife, Nancy, and his daughters: Hailey, 10, Katelyn, 7, and Taylor, 5.

He said he has been surprised by news coverage of the war, which he says doesn't show some of the good things he sees in Iraq: Americans rebuilding the infrastructure and Iraqis greeting him and his fellow soldiers warmly in the streets.

Harris spoke to a reporter by telephone from his home Nov. 6, a few days before he was set to return to Baghdad. His thoughts about returning to the war zone?

"It's going to be hard. I'm not looking forward to it," he said.

But he didn't have any doubts that he would.

"We'll go back and get this thing finished. We're just trying to do the right thing and (return) home in a good mode," he said.

Neida Castillo of Tallahassee said good-bye to her husband, Renaldo, on Oct. 31, after a two-week leave. She said the visit was good; she and her husband even made a spur-of-the-moment decision to fly to Colorado Springs for a five-day vacation within a vacation.

Saying goodbye again was hard, Castillo said, but they were ready for it.

- Curtis Krueger can be reached at