On the eve of Bush's visit to Britain yesterday, protestors from a diverse range of concerns converged on the International Convention Centre (I.C.C.) in Birmingham to protest at Tony Blair's arrival at the annual conference of the C.B.I. (Confederation of British Industries). 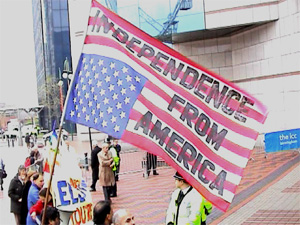 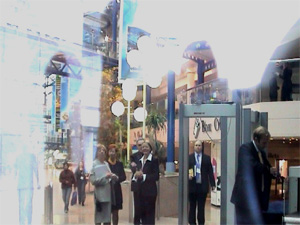 Inside the CBI conference 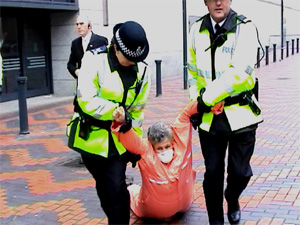 Protestors demands ranged from calls to halt the illegal occupation and continued bombing of Iraq, to stopping the unrestrained lobbying power of the C.B.I. Protestors were also united in expressing their outrage at the appalling human rights record of the United States, and Blair's complicity in denying detained British Citizens their human rights in Guantanamo Bay. Protestors were also outraged at George Bush's visit to Britain and his stay at Buckingham Palace.

Last night people also came to protest at Britain's most powerful industry lobbying group, the C.B.I. According to one protestor from Birmingham Friends of the Earth;

'The C.B.I. lobbies government for harmful business practices that are detrimental to both people and the environment. They lobby against important environmental legislation and they continue to oppose the climate change levy, which should tax businesses for their green house gas emissions. They are by nature a secret and undemocratic organisation.'

Protestors were also accompanied by two activists dressed in orange overalls, symbolising the illegally incarcerated and tortured detainees in Guantanamo Bay. They attempted to register for the C.B.I. conference to counter-lobby the assorted corporate interests of the War of Terror's war machine. They also felt obliged to correct Blair's intentionally misleading statement concerning the threat to world peace and security by so-called 'terrorists'. Instead the activists felt compelled to remind delegates that the combined State Terrorism of Britain and the US was far more likely to precipitate global terrorism and the threat of nuclear war.

They successfully occupied the entrance of the ICC for some time whilst waiting for Blair's arrival. At Blair's arrival they knelt down, with their hands behind their backs and their masked heads down. This was intended to remind Blair and his entourage of their complicity in the denial of British Citizen's civil rights, legal support and the torturous conditions that detainees are enduring in U.S. occupied Cuba.

Birmingham's International Convention Centre yesterday hosted two of the most secretive and unrepresentative organisations in Britain. On the one hand we have the C.B.I. who possess powerful unmediated interests and industries that make up the machinery of the War of Terror. And on the other, an unrepresentative Prime Minister who has made an undemocratic and unilateral decision to illegally go to war and occupy what were two sovereign states in the Middle East. Both shadowy organisations put profit before people and the environment and are directly related to the industry of War.