Another report and pics from the Burning Planet anti Bush demo on Tuesday evening. 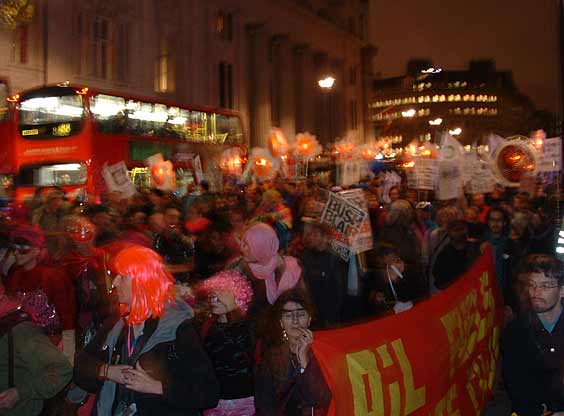 The demo just after Trafalgar Square 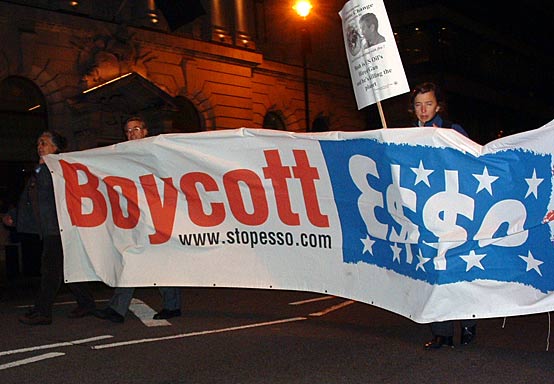 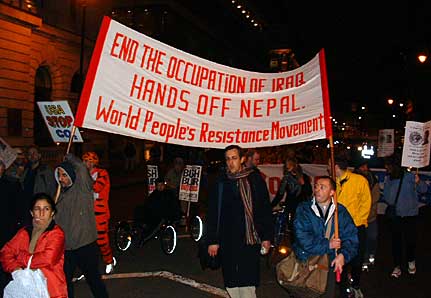 Another one of many banners 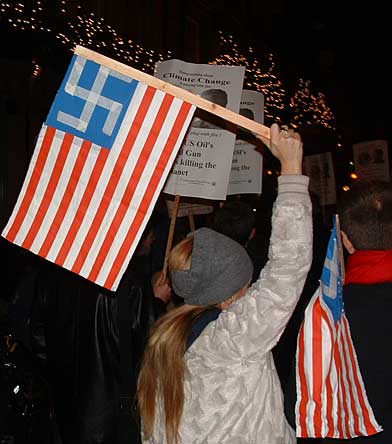 The US is increasingly compared to Nazi Gemany these days 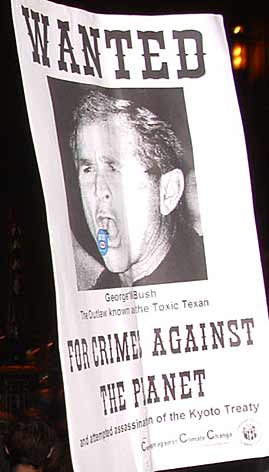 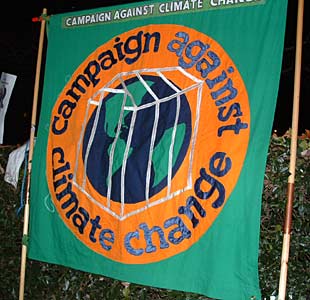 Climate change was the main focus of this demo 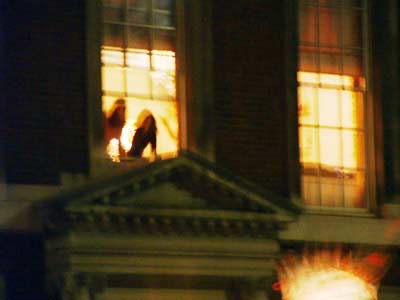 On Tuesday evening the Burning Planet demonstration went from Lincoln's Inn to the Esso/Exxon HQ at Aldwych. Esso/Exxon were the biggest donators to the Bush election campaign and have reaped the rewards of their investment in all kinds of ways apart from just the oil wars.

After leaving Exxon we headed off for the US embassy in the West End. It's called an embassy but from the size of it's pretty obvious that more than just embassy work goes on there. The building is massive, far, far larger than any other embassy I've ever seen. The police had multiple lines of railings set up around the building creating a kind of no mans land between us and the building.

The demonstration was cheered and supported by a number of passers by, even in the rich areas. People cheered even from several ultra expensive West End properties. One of these was just a grenades throw away from the US embassy. Bush has enemies even in high places it seems. On a TV show tonight it was claimed that 51% supported Bush while 49% opposed. Well that's a pretty bizarre statistic and it certainly didn't feel that way on the streets. I'm sure some people do support Bush but I've yet to meet anyone with a good word to say about him.

The demo could have gone via Buckingham Palace, we got to Trafalgar Square, but the route had been agreed with the Police and I'm sure they wouldn't want us getting within earshot of the world's most wanted man.

The Green party handed out a leaflet advertising an anti-Bush T-Shirt competition. This will be at 6.30pm outside Buckingham Palace tomorrow so get down there if you fancy your chances or just want some amusment. A woman on the demo already had a pretty good one I thought. All it said was 'Bush is a Cunt'.

This demo seemed about 3 times larger than Saturday's Sheffield demonstration making it around 3000 in number. It was very musical and colourful with all kinds of props and banners. The Samba was great as ever but other music was provided by the Rinky Dink pedal powered sound system and another trike with a sound system on the back.

The policing was fairly heavy considering what was happening - a simple demo - with a number of Forward Intelligence Team (FIT) members particularly around the Samba Band. These guys, recognisable by their blue and dayglo tops have habit of picking someone and following them for hours - this is probably a bit like living in communist Russia and being followed by the KGB I imagine. They have claimed in the past that they're following people who they think are ringleaders but if that's true then they're not very good at what they're doing. It seems more likely the intent is to try to intimidate and scare people rather than get any real information.

However they didn't seem to be photographing everyone as obsessively as they sometimes do - though one cop photographer was standing by outside McDonalds on the Strand. I didn't hear of any searches so I guess Al Quaida must have been somewhere else tonight.

The demo ended with speeches outside the Embassy. I left before these started as did around half the crowd it seemed.