Yet another naked word protest against bush! 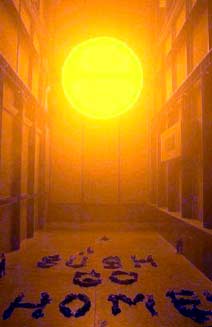 Anti-war protesters literally spelled out their message to the US President tonight – Bush Go Home.

Around 80 people layed down at the Tate Modern in central London form the three words in the Turbine Hall – their message reflected on the mirrored ceiling above.

The protesters took advantage of a temporary exhibition, The Weather Project, by artist Olafur Eliasson to voice their anger.

Scores of spectators and participants clapped and cheered as the letters formed into a simple but blunt statement.

It did not take long for those round the edge of the demonstration to help form the final word, Now.

One of the organisers said: “It worked really well, this was designed to get a message across. I think it is a brilliant use of art for the people.”

“Stop what you are doing, think,” he said. “He is lying to us. He is lying basically about everything that the war has been based on and now I think we know his motives.”

The group of friends who met for today’s symbolic protest are all involved in the art world and were gathered to take action in just three days.

The idea was only hatched on Saturday, one protester said.


kit off for bush