As Bush was flying in to London protests were already underway. Over one thousand people marched on the US embassy (via the offices of ExxonMobil) in the Burning Planet March Against Bush. Focussing on climate change the march was noisy and bright and gained support from many passing by. Outside the US Embassy speakers including former Environment minister Michael Meacher, Tony Juniper (Director, Friends of the Earth) Stephen Tindale (Director, Greenpeace)and others all lined up to denounce the destructive policies of the Bush administration and its corporate sponsors.
See [report] [report + pics] - Pictures [ 1] [2] [3]

Meanwhile in Brixton yet another statue of George Bush was being toppled by campaigners, this time complete with mock trial where he was found guilty of a number of charges - see report and pics [ 1] [2].

Earlier in the day another naked protest against Bush took place at the Tate spelling out the words 'Bush Go Home', while students at University College London have occupied part of the university. The London School of Economics Student Union also voted to support the next three days of protests. 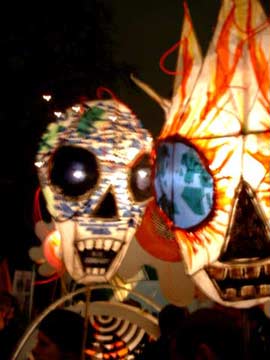