On the evening of November 20th, around 2000 people turned out to give Dubya the two-fingered salute in Oxford city centre.

Reports: [1] [2] | [Pictures and report]
Click Read more for a detailed report and lots of pictures.

Other actions in Oxford or by Oxford activists: 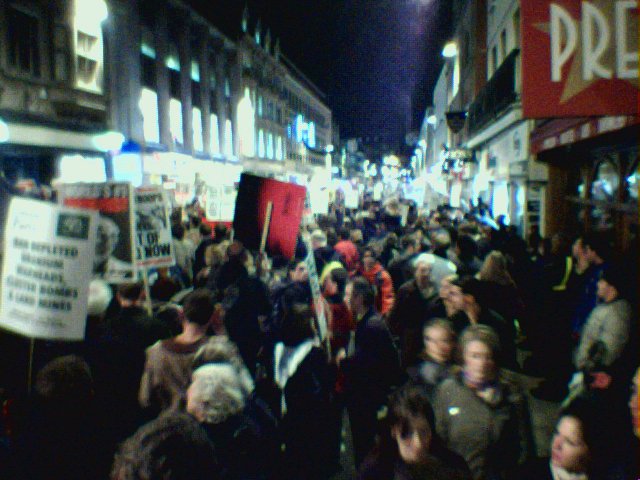 Oxford turned out in force to march against the visiting war criminal George Bush. From one side of the city, processions came from Cowley Road and Headington, meeting up at the Plain, and marching together up to Carfax and Cornmarket.

The bell tower at Magdalen college rang out as we marched past, set against the pounding beat of two corps of samba drummers marching ahead of us, with horns, whistles and shouts punching through the roar.

The crowd was mixed: there were many in attendance from socialist groups, anarchists, greens, peace groups and unions. But there were also a lot of people there who looked as if they'd never been on a demo before: middle-class men and women in suits and long coats, well-to-do types in tweed jackets, mothers pushing prams, couples with babes in arms, and school kids in small groups. All these people, from every class and background, just couldn't bear the thought of Bush being treated as an honoured guest here and had to come out on the street to say so out loud.

We made our way up to Cornmarket, and were amazed to find it completely jammed. Speakers took to a small podium to denounce the criminal being expensively wined and dined by royalty in London, all paid for by the rest of us, as usual. A statue of Bush was pulled down, to huge cheers from the crowd. Then one small group of about five young men burned an american flag, but most of the crowd displayed little enthusiasm for this.

The police presence was a little heavy: the official route was lined with cops in bright green jackets, and cops mounted on horseback rode up and down the procession, dropping mounds of steaming horse shit along the nearside path they were forcing us to walk along. This created difficulties for some families, but didn't slow the rest of us down much. They did however constantly hover around us with video cameras, taking photos of marchers' faces with large cameras using flash and floodlights, etc. At the outset of the march one marcher asked the officer with the megaphone why this was being done, and the baffling answer was that it was "for the public's safety".

The procession starting out in Headington: 1 | 2 | 3
Police cars block traffic lights on Headington Road to allow us through: 1
Walking down Headington Road: 1
Merging with the Cowley Road procession at the Plain: 1
Across Magdalen Bridge and up the High Street: 1 | 2 | 3
Turning onto Cornmarket, which is by now completely jammed: 1 | 2 | 3 | 4 | 5 | 6 | 7
Always lots of cops behind us: 1