Some pics and a short report from a member of the 250-strong Oxford contingent who went to London on 20 November to protest against the visit of George Bush. 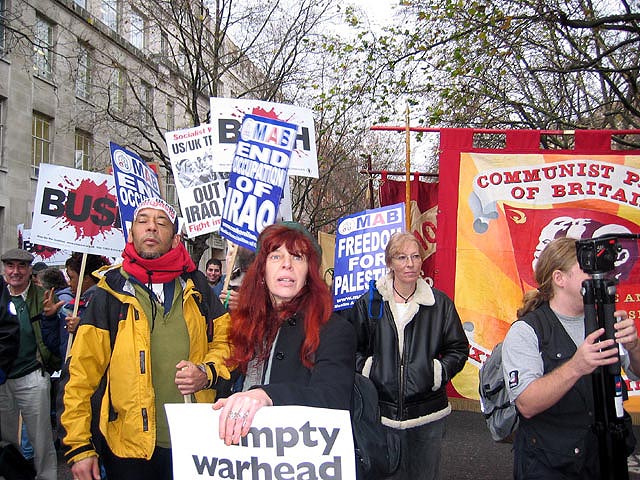 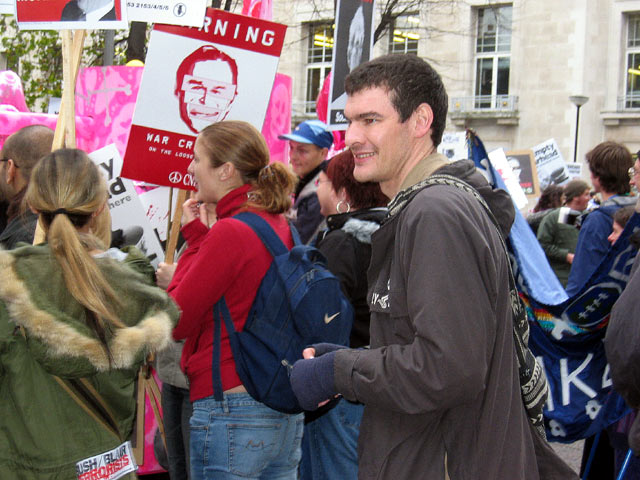 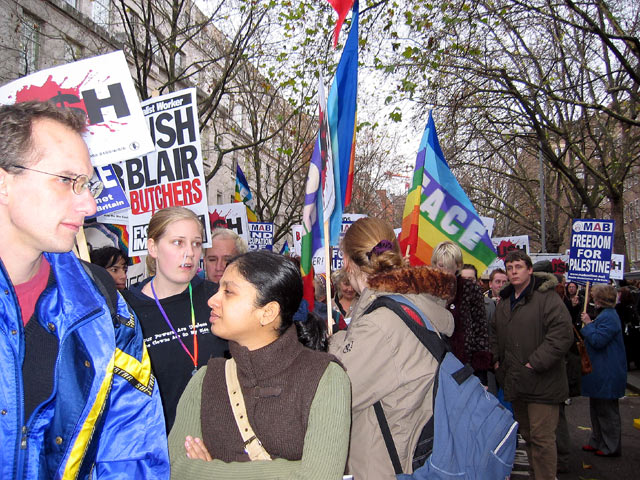 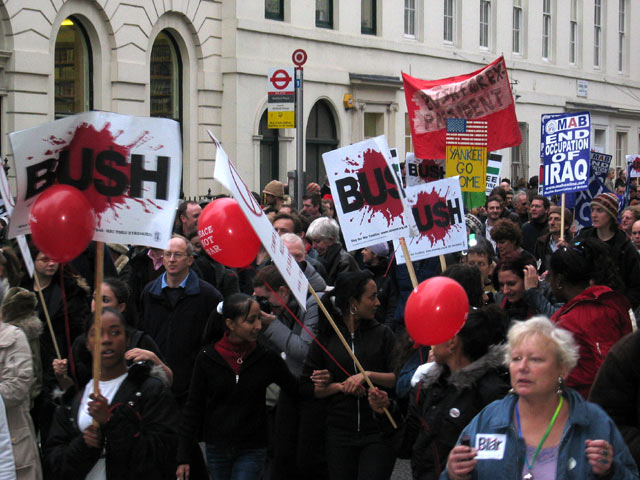 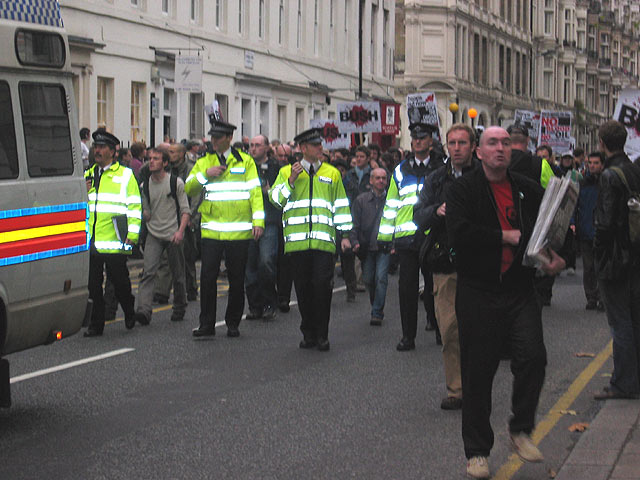 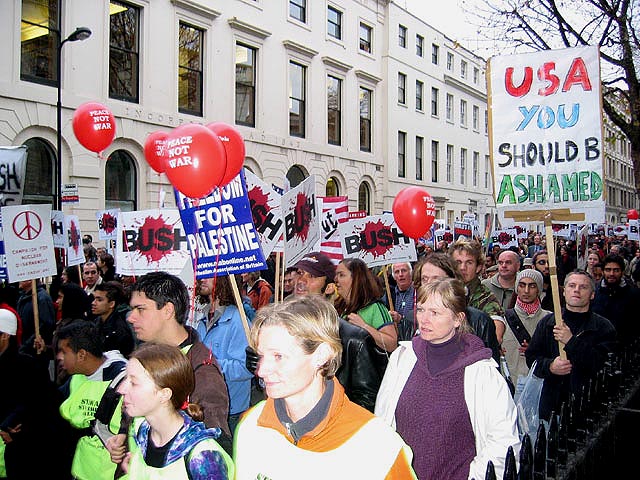 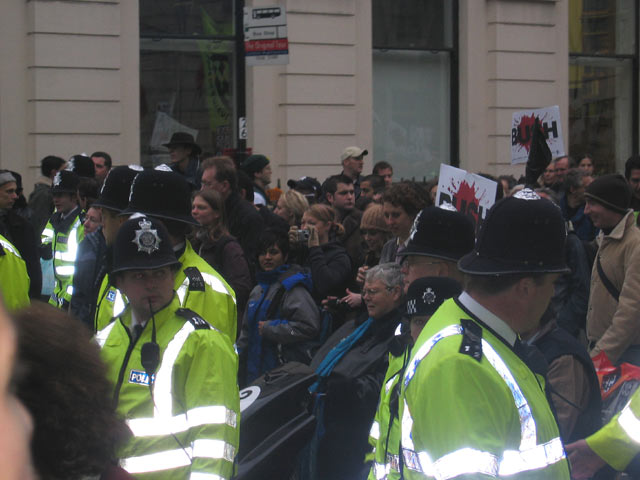 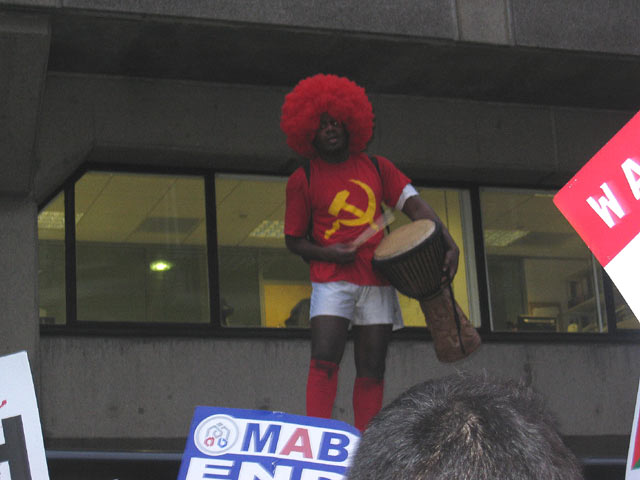 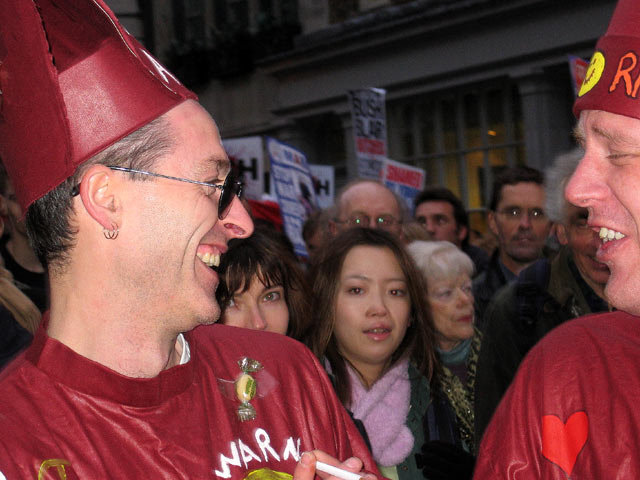 Here's looking at you, Bish!

For a broader picture of events in London, please go London Indymedia at: http://www.indymedia.org.uk/en/regions/london/  or Stop the War Coalition at: www.stopwar.org.uk/

However, just a few details about the Oxfordprotestors’ day out in London. We left Oxford around 11.30 am in three coaches, including two double-deckers. Despite hold-ups and tailbacks we arrived early and made our way to the assembly point in Malet Street by 1.30. Everybody was in high spirits, there were lots of home-made banners, some of them very witty or attractive, and a number of Bush and Blair dummies, clever but rude.

Just a point about the disparity between the turnout figures of the police and the organisers (100,000 versus more than 200,000). This could be partly due to a genuine misunderstanding. Far more people turned up in Malet St than the police had bargained for, we were completely blocked for over half an hour. We Three Musketeers decided to get out, which we did with some difficulty, and rejoin the march at a place of our own choosing. Making our way down side streets in the Russell Square/Southampton Row area, we found that the police were barricading people out of the Malet St area ‘for safety reasons - too crowded’. There were, therefore, many people wandering around side streets trying to make their way to Trafalgar Square whom the police probably regarded as having left the march.

Anyway, we got to Trafalgar Square and saw the toppling of the Bush statue, rather reminiscent of the Golden Calf made by Aaron (check your Old Testament, you heathens!!). We were too far off too hear the speeches, but the crowd was very relaxed and pleased with what they had achieved.

A footnote: Some people have tried to criticize us for holding the event while scores of people lay dead or injured in Istanbul. This is a complete misunderstanding of how events like this unfold. I personally did not hear about Istanbul till 10pm when I arrived home, and I think this would go for the majority of demonstrators – we are far too busy concentrating on what’s going on around us and are usually ‘out of radio contact’ for the duration of the protest.