rhythms of resistance samba band swelled by members from sheffield, barking and amsterdam bands took part in a day of action against bush on wednesday 19th november - report and pics› 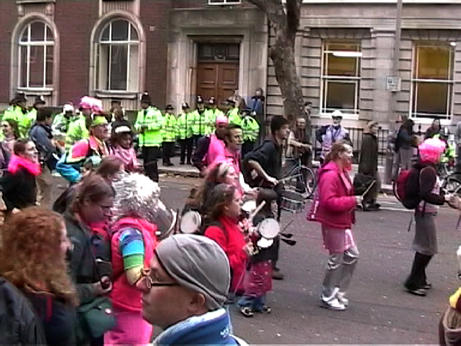 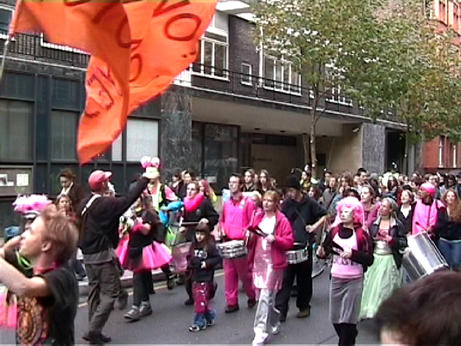 setting off towards tottenham court road 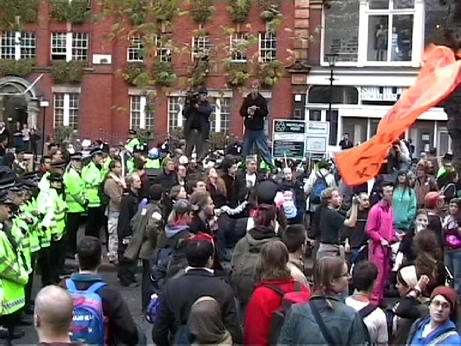 cordoned in by police 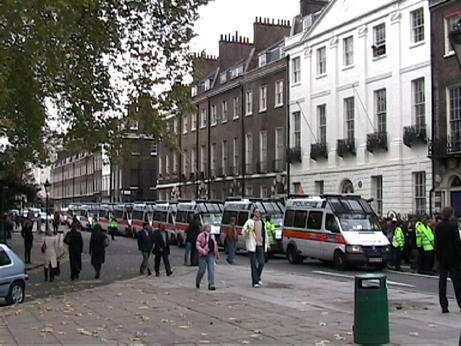 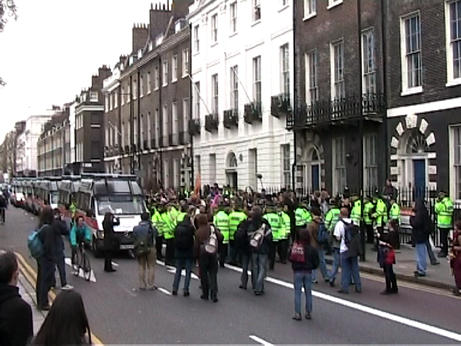 another shot of goodge street 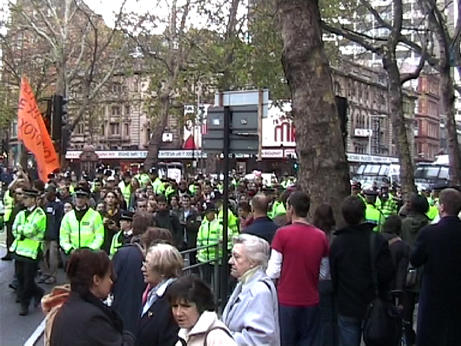 road block at the top of shaftesbury avenue 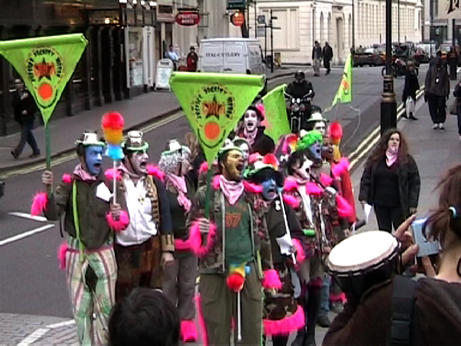 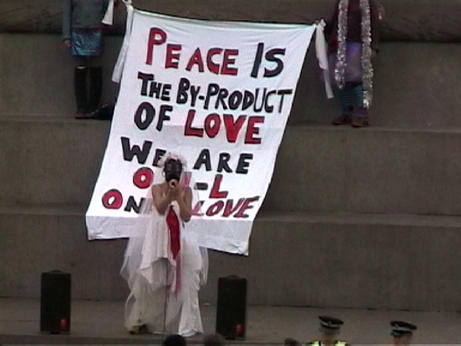 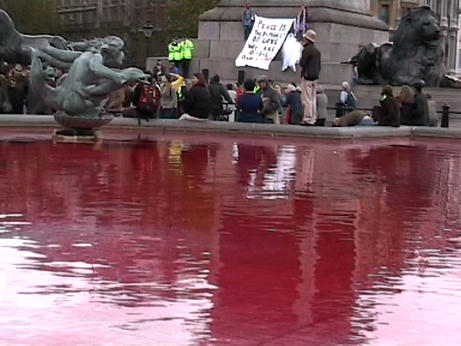 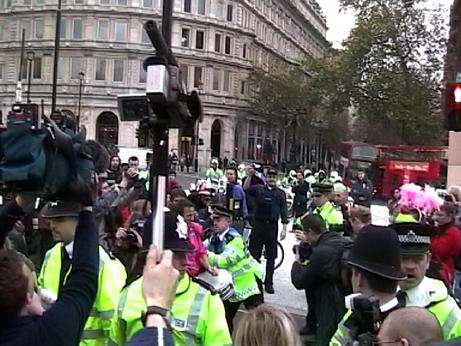 some pushy police at trafalgar square 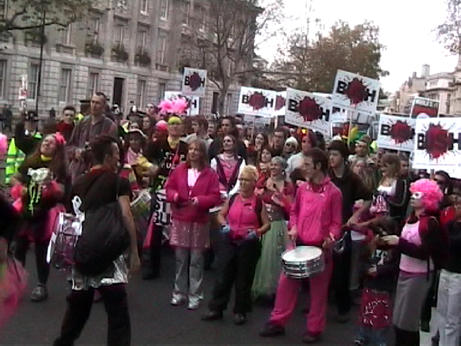 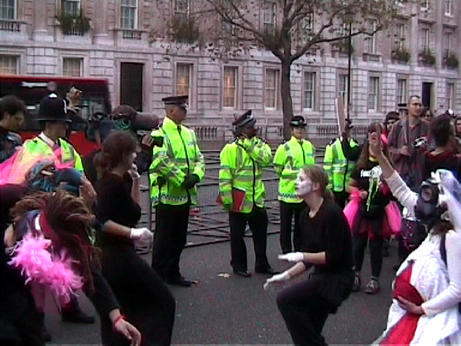 dancing in the street at whitehall 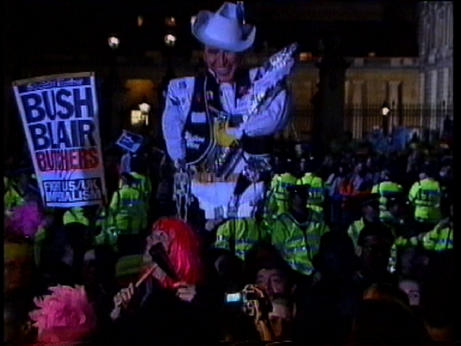 ch 4 news vidcap of samba at the palace 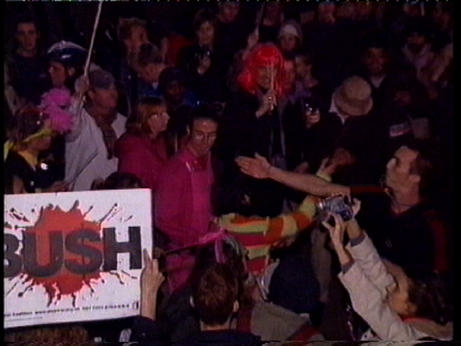 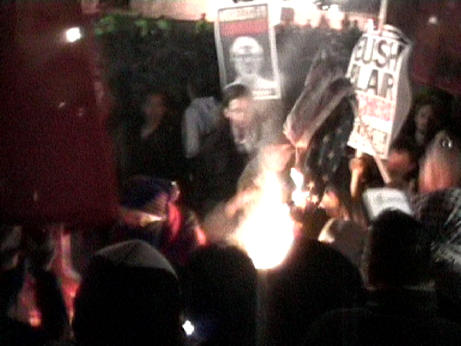 burning us flags at the palace

around fifteen sambaistas and a crowd of up to a hundred supporters set off from malet street in the early afternoon for a roaming street party around london. police accompanied the procession as it set off down tottenham court road, but soon they had cordoned off the main road and pushed the demonstrators into a side road where they were held for a while. after some tense negotiation, the march was allowed to continue down goodge street, by now ringed by police and accompanied by more than a dozen police vans.

some of the demonstrators attempted to break the police lines at the top of shaftesbury avenue, but soon the procession was ringed and once again accompanied as it made its way down the avenue towards trafalgar square. the samba rhythms attracted passers by who tagged along outside the police cordon, and roads were effectively disrupted equally as well if not better than the original street party would have managed on its own!

just north of trafalgar square, a group from the clown army arrived and joined in the march. at the square the silent o-i-l protest by women had just finished, the fountains were blood red and police photographers were busy getting everyone's shots.

after a short break, an attempt by the band to break out at the south side of the square was foiled by some pushing and shoving from police, although the fact that media cameramen were filming prevented them from getting too violent. after more negotiation, the police surprisingly agreed the march could continue towards victoria along whitehall.

outside downing street, samba and dancing reclaimed half the road for a while and the carnival atmosphere was electric. by about five o clock, the revellers arrived at parliament square, where further negotiations led to a new route along birdcage walk and to buckingham palace. people hung out the windows of various government buildings including the foreign office and waved and cheered the band on.

outside buckingham palace, the police had set up barricades and some scuffles occured when one of these went missing and some of the band spilled out into the road. there were several hundred protestors already at the palace and the atmosphere was fantastic as a huge crowd gathered round the band and danced for nearly an hour. a small group of protestors were burning american flags, and the noise from the band must have been clearly heard within the palace. channel four covered this demo in its report on the day.

rhythms had once again been the focus of successful demonstrations throughout the afternoon in central london.