a samba day out resisting bush on 20th november

rhythms of resistance samba band swelled by members from sheffield, barking, oxford and amsterdam bands took part in the day of action against bush on thursday 20th november - report and pics› 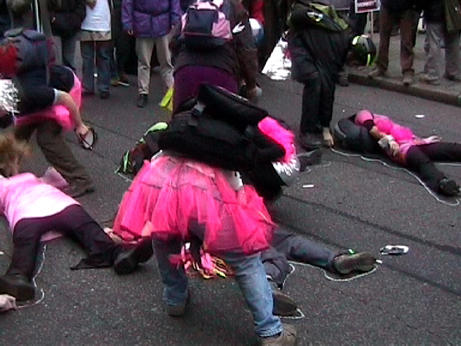 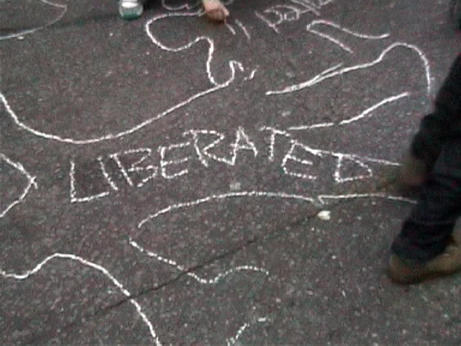 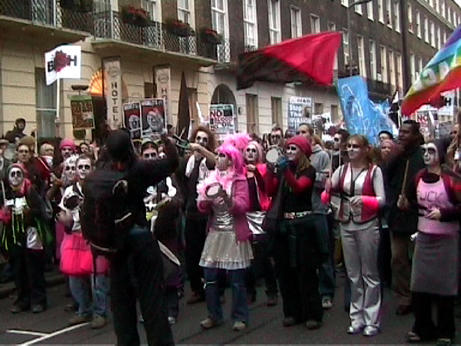 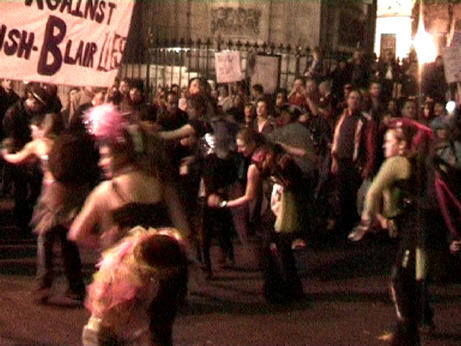 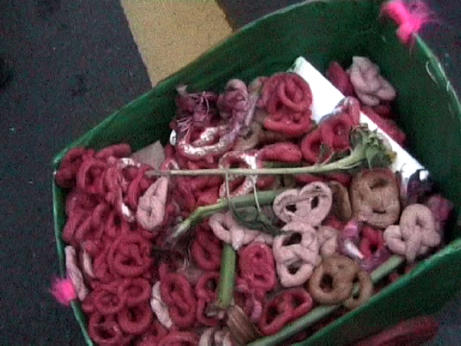 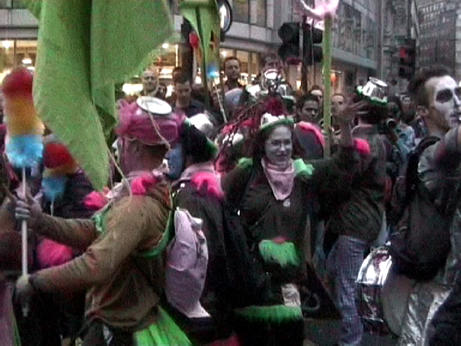 ... with a supply of pretzels 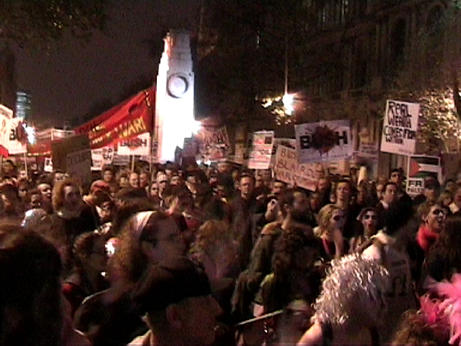 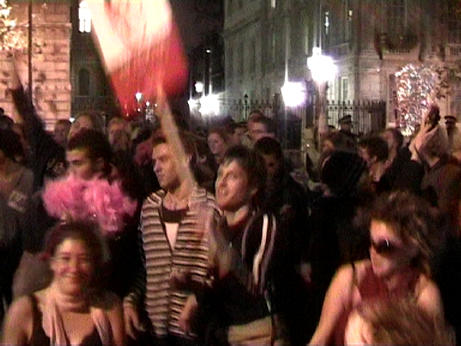 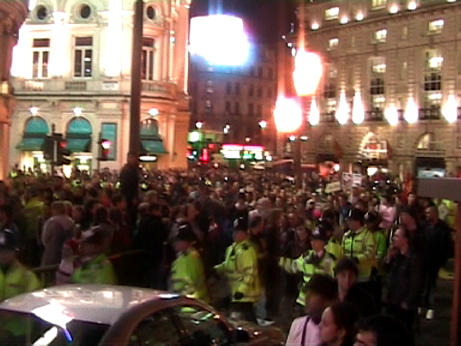 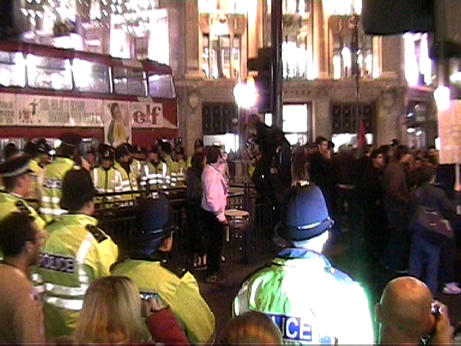 the kettle cordon at oxford circus 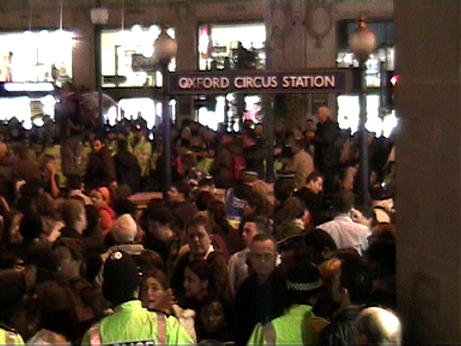 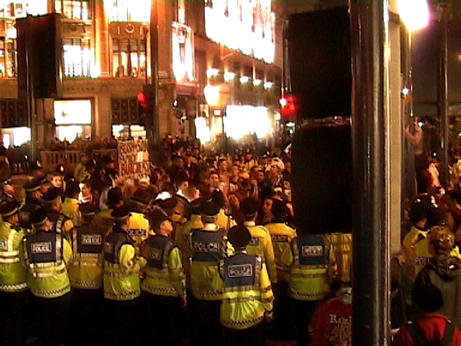 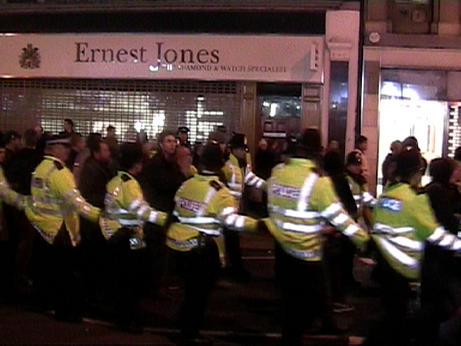 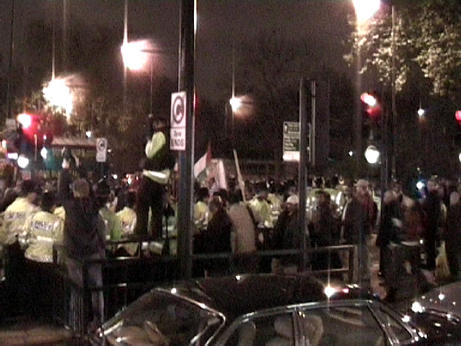 sambaistas from all over converged in malet street to form a huge band of more than thirty players and half a dozen dancers for the national march on thursday.

as they set off, they staged the first of several die-ins - a powerful piece of street theatre. accompanied by a slow pulse from the entire band, the dancers fell to the ground and their positions were marked with chalk. as they rose, various slogans were chalked into the body markings - 'liberated iraqi', 'died for oil', 'freed iraqi' etc. - during this time the band pulse had been building up and up, and as fake blood was poured over the markings, the crescendo reached its deafening climax and the band reverted to samba rhythms and walked on, while the crowds roared.

for much of the march, the band created a carnival atmosphere with much dancing and cheering from the crowd around. the clown army turned up on kingsway with a trolley full of mock oversized pretzels. a pair of breakdancers also put on a show. another very moving die-in took place outside the esso building.

after a couple of hours, the band took a bit of a break from waterloo bridge along the south side of the river, although some percussion and chanting continued. on westminster bridge the build-up towards downing street began, and by the time they got there, the crowd was in a frenzy, so that there was a huge street party going on outside the gates. in each of the signalled stops in the music, hundreds of protestors shouted out 'fuck bush' in unison before the beats and the dancing continued.

as they approached trafalgar square, it appeared the police had set up a road block, and because of this some people had begun a sit-down protest - in fact, the march was just detoured round and up northumberland avenue to avoid overcrowding at the south side of the square and also no doubt to dissuade people from spilling out down whitehall from the square.

as the samba band approached the square at near seven o clock, the atmosphere was fantastic. although the main rally was now over, the tail of the demonstration was still nearly half a mile away, the square was completely packed, and tho the band had been walking for four hours, their beats carried on and huge crowds danced around for another couple of tunes.

after a short break, critical mass were spotted passing by the south side of the square, and a crowd including a good part of the band decided to follow them and march up pall mall and into lower regent street. a load of police followed, and in the relative darkness and unhindered by mainstream media, they started a running battle, violently attacking and arresting pretty much anyone who was running up the road. despite all this, including one of the female dancers getting punched in the face by police, some of the band managed to keep playing, and they reformed in the brightness and safety of piccadilly circus where they blocked the road with music and dancing for a little while.

as police began to cordon them again, the (smaller) band and some fifty or so demonstrators set off up regents street, with occasional minor scuffles, but by the time they reached oxford circus they were completely outnumbered and kettled by police. many totally innocent bystanders were caught in this cordon. worse still, and completely unlawfully, the police were targetting anyone shouting anti-bush slogans, or even quietly filming, and trying to pull them into the cordon as well.

within the cordon, which completely blocked the south side of oxford cicus for about half an hour, the band regrouped and started playing loudly and defiantly again despite constant intimidation from the police. once enough police reinforcements arrived, the cordon moved the group of some seventy people west along oxford street towards marble arch over a period of another couple of hours. this was done by pushing and crushing people from behind while officers linked arms and enclosed the whole group on all other sides. some band members were assaulted during all this, including one girl having her long hair pulled hard and backs of her legs kicked.

the unlawful detention and aggravation continued until past ten o clock when finally the group was allowed to disperse one by one having their photographs taken. meanwhile, the other half of the band were apparently entertaining a street party at hyde park corner for some time during the evening, although once again, they were attracting violent behaviour from the police.

as rhythms of resistance is an explicitly non-violent collective, it is intolerable that violence and intimidation are they main tactics the police use against peaceful demonstration. it is a clear sign once again that the so-called freedom and democracy the bush/blair axis is exporting round the world is a sham and a lie. people are not allowed to express their dissent in a peaceful manner in this country without being subjected to violence and intimidation from lawless security forces - meanwhile these liars continue to break international law with impunity. it is time the media and middle england woke up to what is going on, before the place begins to resemble a nazi state.

be a conscious protestor - look after others - protect the samba band - be part of the crowd in the way when the police come - help those with large drums when they need to run - stick around and witness when the police break the law - work together and learn to repond._