Film screenings of "We Interrupt This Empire..." and "Kilometer 0". 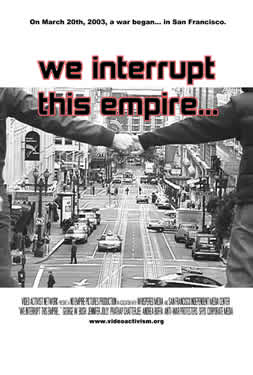 "We Interrupt This Empire..." is a collaborative work by many of the Bay Area's independent video activists which documents the direct actions that shut down the financial district of San Francisco in the weeks following the United States' invasion of Iraq. The documentary takes a look at the diverse show of resistance from the streets of San Francisco as well as providing a critique of the corporate media coverage of the war, the Military Industrial Complex, attacks on civil liberties, and the United States' current imperialist drive.
Download 8.5X11 PDF poster  :  Print-ready Images  :  Action Trailer: 56k Broadband

From September 10th to September 14th, 2003 the WTO barricaded itself inside of Cancun, Mexico's luxury hotel strip to set the terms along which our lives would be bought and sold. Tens of thousands of people came from around the world to rip down their fences and stop the meetings. By the end of the week the steel barricade was a twisted wreck and the talks collapsed as delegates fromt Asia and Africa walked out.