A report and pics from a wonderful afternoon spent with the Samba block in Thursday's protests against BU$H. 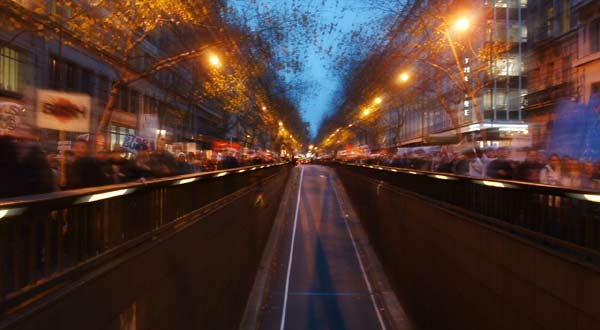 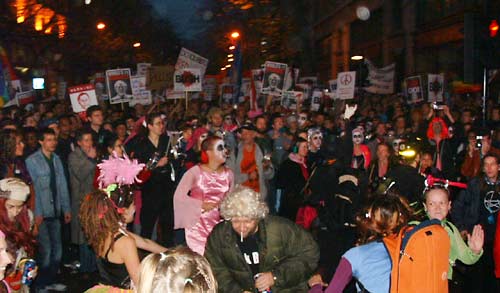 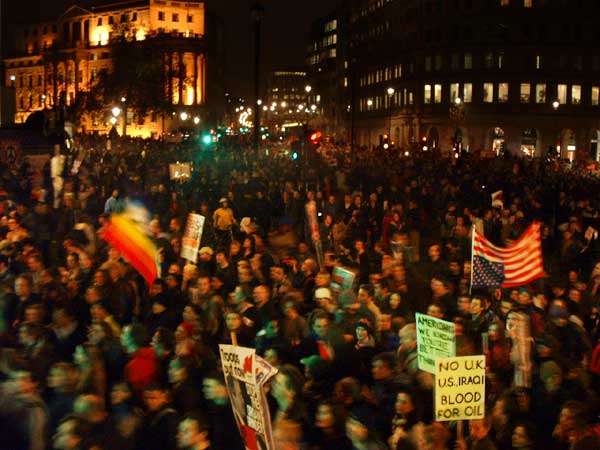 South side of Trafalgar Square is packed (6.45pm)

When I arrived at Malet Street I couldn't find anyone I knew so I waited at the start of the march for the Samba band to cruise past. I hung out on some steps facing the march - a spot popular with an assortment of photographers and TV crews. Several knocked on the door behind us to see if they could take some pictures from inside the building on floor above. This was refused. The caretaker explained that the room was already being used by police photographers.

It was impossible see how big the march was but after an hour of watching people pour past the start with no end in sight it was obvious there were a lot of people there.

About an hour after the march started I finally heard the familiar drumming sound and it wasn't long before I hooked up with the band.

A few streets from the start some quick street theatre was performed in front of the band. People lay on the floor as dead bodies and someone else drew chalk outlines around them. Then the word's 'liberated Iraqi' were written inside to the corpse outlines. While this was going on the band had reduced the music to a single repetitive beat and people started clapping along as the tension built up and up. It all finally exploded when the main rhythm kicked back in and off we all went again. This was cool, a really great atmosphere was developing. A few streets further on I even noticed a woman inside a building looking out and swaying to the rhythm as we went past.

Further on we turned into the first main street, Southampton Row. Because the road was wider the crowd appeared to be bigger and the whole thing was now more like a mobile party than a demonstration. The crowds energy grew as the sound reverberated off the tall buildings on either side of the street. There didn't seem a lot of cops around either which made a nice change. The band stopped occasionally to really build up the tempo and this really got people going.

We continued down Kingsway - an even wider street. The march was only supposed to go down one side but the few police couldn't stop people spilling out onto the other side of the road and thus closing it to all traffic. Office workers stared from high windows to what must have been an amazing sight below.

Up until then I'd assumed that the Samba band had been pretty near the back of the march. However at the end of Kingsway, above the underpass, I looked back to an amazing sight in the now fading light. There were thousands of people completely filling the streets, streaming down the road on both sides of the underpass.

When we got to the Aldwych we stopped again this time for a good reason. This was the headquarters of Esso who are part of Exxon. Exxon were the biggest sponsors of the Bush presidential campaign and so deservedly the number one corporate target today. The band played on and by now the atmosphere was quite extraordinary, better than most parties or club nights and all without the help of drugs. I don't think many people were even drinking.

After maybe 10 minutes we continued on and over Waterloo bridge and down York road. We were completely separated from the first part of the demo and the band now seemed be leading our own march behind a banner which said 'US/UK unite against Bush-Blair lies'.

We re-crossed the river on Westminster Bridge to stop again for a few minutes outside the Houses of Parliament. Around here the police presence had grown but it was still fairly low key. But just by the tube everyone's favourite, the police photographer, stood waiting to capture images of those presumed guilty of future offences. Taking anyone's picture close up is generally considered pretty rude when done without asking but when it's for the reasons the police do, well it's no wonder people get pissed off.

However on this occasion help was at hand. As the police photographer raised his lens and took aim a group of scantily clad girls took the initiative and danced right in front of him. He was forced to retreat but the girls followed every time making his odious task completely impossible. Well done team - that was inspiring to see.

The mobile party then hummed its way up Whitehall stopping for a short while opposite Downing street to the sound of a long deep drum roll. The end of Whitehall was closed - apparently to protect the McDonalds there. Whitehall's McD's has been smashed up three times before, the last time famously on Mayday 2000. So the route cut across into Northumberland Avenue to get to Trafalgar Square. Hundreds of people seemed to be leaving the square as we were going towards it but by the time the Samba band reached Trafalgar Square the street was completely full behind.

I've been to many big demos that have ended here but never seen the place with so many people. Whilst the centre of the square wasn't densely packed the crowd seemed to radiate out into every side road. The band gradually made it's way round to the west side of the square and stopped playing. Then those around it started to chant over and over 'Samba is the future'.

I took a break and an Asian man came up and gave me a free apple and some mango juice - cheers mate - just what I needed. After that I headed off with CIRCA (Clandestine Insurgent Rebel Clown Army) while the band got trapped in the square by the police lines. I heard they later they made it up to Oxford Street but I didn't see them again.

All in all it was a great day out. The estimates range from 200 to 400 thousand people (even the police said 110,000). How you estimate that though I don't know. I think some people arrived late after work, missing the march entirely, whilst others will have left early, well before these (and us) had even arrived.

But at the end of the day it wasn't simply a numbers thing. The February demonstration was much bigger. But for me, on the bit of the march I was on, this was much more powerful and enjoyable event. The Samba band had played a wicked set of tunes and attracted a great crowd of people.

The mainstream media here have claimed that Bush's visit to the UK was a PR victory that will help him get re-elected. What has happened in the UK has been a wide range of very creative protests taking place all over the country. Bush has been forced to cancel several important appointments like the State Procession just in anticipation of protests. Multiple Bush statues have been toppled, children have burned Bush effigies and there are reports of protest everywhere. If that's what they call a PR victory I can't imagine what a PR failure would like.