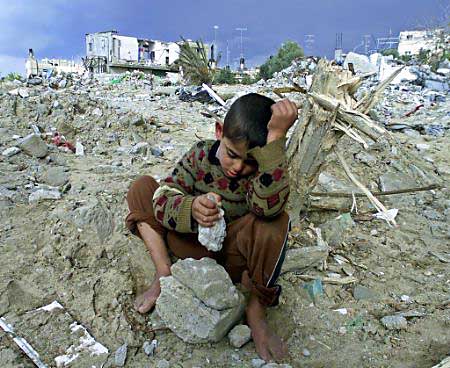 A Palestinian boy sits atop the rubble of his home 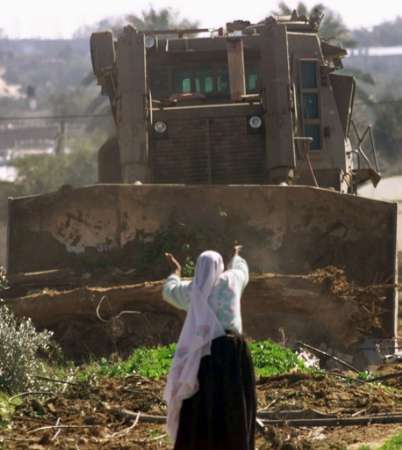 A Palestinian woman confronts an Israeli Caterpillar made D-10 Bulldozer


Precious few are allowed entry to the Gaza Strip as it is completely controlled by the Israeli Military who are trying their best to hide the crimes committed here from the rest of the world. Little information about the true situation in Gaza is available to those who seek it and even less to those who are not. I am one of the fortunate few who were able to gain entry into Gaza more through pure chance than anything else. I make my home in Rafah, a city of 150,735 inhabitants made up of several neighbourhoods and refugee camps located at the far south of the strip,
directly along the Egyptian border. My job here is to document what is happening in an attempt to open up the prison that is Gaza to the outside world, to work in solidarity with the people living here to show them that the world is not ignorant nor has forgotten their plight.

For two weeks before I arrived, Rafah was under invasion by the Israeli Army. During these two weeks tanks and armoured bulldozers went to work destroying large parts of the city. Eighteen people lost their life and hundreds of houses were destroyed by both bulldozers and explosives. The nearby hospital was overflowing with injured people. For the past week I have been visiting areas affected by the invasion. These are truly the most tragic sites I have ever seen.

As I visit Block J and Yibneh Refugee Camp twisted metal and concrete lie in heaps where once two or three storey houses stood, the strength of their building materials subdued by man and machine. Gaping holes are left in some houses, allowing a full view inside, while on others half of the house has simply been blown away. Everywhere the scattered remains of normal life remain. Shoes, cooking utensils, pieces of household items strewed through the wreckage as a reminder that not so long ago families made these heaps of rubble their homes. Children’s toys peek out from under slabs of concrete along with tattered clothing left behind as
the family fled in terror in the middle of the night. Walls riddled with bullet holes surround gaping holes where houses once stood. Families are usually given no warning as to when their houses are to be destroyed. Instead gunfire and tank shells inform them that it is time to leave. Time to leave behind what few items they posses.

Because of the destruction hundreds of families have been made homeless. One house alone may house as many as or possibly more than forty people. In many areas the people were already refugees, forced from their homes earlier this century. Now, decades later they are made homeless once again, this time with nowhere to go. They cannot leave Gaza and overcrowding is a great problem. Families have no money in order to secure a new house and must rely on the charity of family members and
neighbours who were more fortunate this time round in order to survive.


In Brazil Camp several United Nations tents have been erected. Here families huddle under bright yellow tents for shelter from the scorching heat. What few belongings they could salvage are piled inside the tent. Young and old, sick and healthy, men and women all face the humiliation of living in a tent, located in the rubble of their former homes. The future is uncertain for these people.

I attempted to visit, for the second time, a house located in Hai Salaam
neighbourhood, in front of which American peace activist, Rachel Corrie was murdered by an Israeli bulldozer operator who crushed her to death while she attempted to stop the house from demolition. On my previous attempt it had been too dangerous to access because a tank was parked in the neighbourhood. I, and a small group, returned. While we were taking pictures of the site one of the regularly patrolling tanks stopped at the house and began to fire live ammunition just above our heads, forcing us to run for cover. We have the option of visiting the house and leaving
when the situation gets dangerous, those living in the house do not have that opportunity. The family living in this house has fled because of the situation. Their house is now isolated in a churned up sea of sand that is waiting to swallow it up.

Should the world continue to turn a blind eye to the death and destruction occurring in Rafah and throughout the Gaza Strip, the entire area will become a desolated sea of sand. We must bear witness to these crimes and call for their end. The fear and terror must stop, without this there can be no hope for peace for Palestine and for Israel.

Jew Against The Occupation