We interrupt this Greek cultural evening

Report of an action in solidarity with the Saloniki 7. 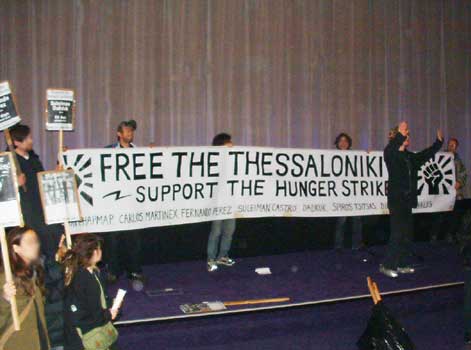 Around 30 or 40 interrupted a film show on Greek culture at the Royal Festival Hall in solidarity with the Saloniki hunger strikers and Greek juveniles held in Greece.

A large banner was unfurled on the stage and many people had placards also. Leaflets were handed out to the audience. We asked to show a five minute film about the case including video footage showing how the police switched Simon Chapman's original blue bag to a black one containing molotovs.

The management was not too sure about this so it was put to the audience. Around half of them raised their hands to signal they did want to see the film, so the management agreed. However after watching it themselves they said they couldn't show the film because it was too violent and they needed special permission (or a licence) to show such footage. It shows Greek police beating Simon Chapman.

After some discussion and another announcement to the audience we decided to leave. Their were already a large number of police at the doors as we left.