Reuters released a new photo, which accompanied by two older ones clearly proves Simon's innocence. The new one is photo number 3 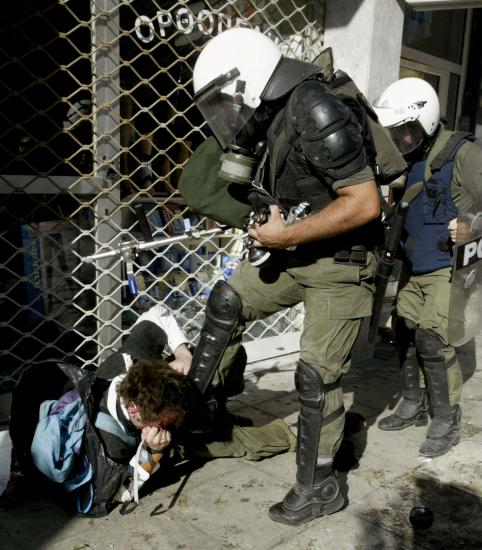 Photo no.1 The already well-known photo by Yiorgos Karahalis: Simon is been kicked by a riot cop while still wearing his blue and purlpe rucksack. This is the text that accompanied the picture:

A Greek riot policeman kicks a protester in a main street of the northern town of Thessaloniki following a meeting of the EU summit June 21, 2003. Police fired volleys of teargas in Greece's second largest city to disperse hundreds of self-styled anarchists who were among 25,000 peaceful anti-capitalist protesters marching through Thessaloniki's centre.The anarchists smashed shop windows and set fire to cars and buildings including a McDonald's. REUTERS/Yiorgos Karahalis