Irish anti-war activist has begun a 60-day jail term for his part in a peaceful protest at Shannon Airport. 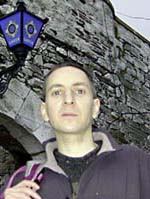 Fintan Lane, PRO of the Irish Anti-War Movement, has begun a 60-day jail term for his part in a peaceful protest at Shannon Airport. He was taken by gardai from his home town of Cork to Limerick Prison yesterday (Wednesday 26 November 2003).

A fine of €750 was imposed in April by Judge Joseph Mangan at Tulla District Court for Fintan’s part in a mass trespass at Shannon airport on 12 October 2002. Fintan Lane was given three months to pay the fine, but refused to do so. The deadline for payment passed on 29 July.

Speaking shortly before his arrest, Fintan Lane said: “The mass trespass in which I was involved was an act of protest and resistance against the integration of an Irish civilian airport into the US war machine. What we did was an act of conscience and I have no regrets. I couldn’t pay this fine because that would be to plead guilty retrospectively and I will not do that. I feel no guilt over my actions.”

He continued: “Innocent people are being killed in Iraq and Afghanistan by the war machine that is being facilitated at Shannon airport. What is happening is an outrage, and it is no exaggeration to say that Fianna Fail and the PDs have blood on their hands.”

“I don’t want to be in jail, but as an Irish citizen I refuse to be implicated in the immoral actions of this government. It is important that people stand up and say no to the refuelling of US warplanes at Shannon.”

Concluding, Fintan Lane called on all those opposed to Irish complicity with the US occupation of Iraq to attend the demonstration at Shannon airport on December 6th: “It is important that there is a large turnout to demonstrate to Fianna Fail and the PDs that we will not put up with the refuelling of US warplanes at Shannon. Enough is enough.”

The Irish Anti-War Movement peaceful mass blockade planned for the airport will assemble at 2pm in Shannon town centre on Saturday, 6th December.