On Saturday 29 November, over 200 people from all over the country gathered for a demonstration outside Campsfield House Immigration Detention Centre, the scene of frequent protests, hunger strikes and a riot, to mark its 10th anniversary. 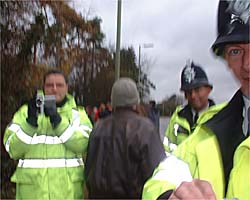 Unusually, the demonstration was very heavily policed. The coach taking participants from London was stopped just outside Campsfield House. Police officers boarded the coach and read out a statement.