The day started with disturbing reports from inside WSIS where the military security seemed to have turned into the 'thought police', examining people's paperwork and questioning one delegate about his copy of Adbusters magazine!

Presentations and workshops continued thoughout the day at the Polymedia Lab, including open source swaps, Yomango, and culture hacking amoung others, while films were also shown in the venue while the High Noon video netcast streamed an impressive collection of films and content, spinning across the globe through the time zones (review).

Inside WSIS (pics) Thursday saw the the World Forum on Communication Rights (WFCR), with an impressive list of speakers covering issues such as Human Rights, Poverty, Communications for Peace and communications during war, Copyright, Trade, and (Resisting) the Enclosure of the Global Knowledge Commons. Speakers also denounced the increasingly excessive use of intellectual property rights as an income protection mechanism, reserving knowledge for the elite and preventing public knowledge from reaching the legitimate public domain. The Civil Society statement on Communication Rights was also released [see Highlights | Commentary].

In the evening, around 50 activists involved in the alternative events WSIS? We Seize! put up a projector in front of the World Intellectual Property Organisation (WIPO) and screened the short film "Give me the Mermaid" - a film criticising the intellectual property regime - on the outside walls of the building. An "official" invitation for the event had been distributed inside the Palexpo building, and a number of civil society and media representatives followed the invitation. The film was a compilation of clips with Disney figures acting as the voices of corporate power. The WIPO is an international institution that harmonizes intellectual property laws on a US based model, giving corporations full right to decide on intellectual property. Rather than inspiring creativity, as the industry claims, activists maintain thatintellectual property rights are a means of control of knowledge in the hands of a few powerful business actors. The police initially tried to stop the screening, but were persuaded to go easy when presented with the invitation to the screening, printed by the group, which looked like a formal and official invitation from WSIS. 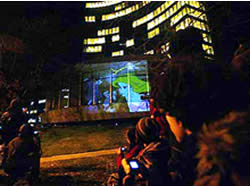