Debates and Actions around Climate Conference in Milan

The central focus of the current Climate Conference in Milan is Russia and their position on the Kyoto Climate Protocol. If Russia would join Kyoto, it creates cheap ways for the EU to meet its reduction targets. Those actions taking place outside of the Conference focus instead on the root cause of climate change, the fossil fuel economy. The lack of action by the United Nations, should make people around the world aware not to depend on states and corporations, but instead to create social-ecological alternatives in our daily lives. 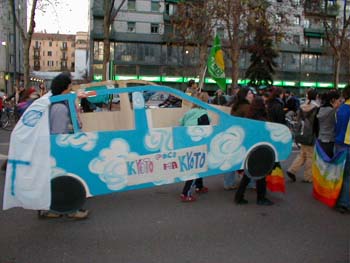 foto of critical mass in Milan

poster of critical mass in Milan

A reclaim the streets, critical mass bicycle action took place in Milan this Saturday, blocking car-traffic at various spots around the city. Reports indicate over two thousand people participated in this action directed towards the Climate Conference in Milan. The police was very unable in blocking the protestors, who were fastly cycling around. The central focus of the protest was the car-economy. Earlier this week there was also a student action. A banner was hung in a public square, saying "Stop Global Warming".
Fotogallery

At the start of the Conference there was much news and new reports that were buzzing around. Here a round-up on the failing of the EU-states to compy with Kyoto, the debate around Russia, "climate projects" in the South and carbon sinks.

EU Member States are unable to reach their Kyoto targets on greenhouse gas emissions, according to a report presented by the European Environment Agency (EEA) on 2 December. According to current figures, only two of the 15 EU Member States, the UK and Sweden, would reach their emission targets. Environment Commissioner Margot Wallström told the EU-states to come forward with "additional measures and implement those already agreed." Also, she wants the EU-states to become "more restrictive when setting national emissions allowances as foreseen under the EU's emission trading system." Wallström has recently been in conflict with other EU-commissioners on setting guidelines and restrictions around the coming EU emissions market, which is foreseen to be implemented in 2005 (research conducted by a German bank however states it is unlikely to be installed by 2005).
See

One of the hot debates around the EU emissions market are CDMs, cheap climate projects within developing countries by which carbon credits can be created, so less measures may be implemented by companies in their homecountries. Wallström wanted to restrict the use of these projects within the EU carbon trading scheme for European corporations. But lobby from the "carbon-industry" and the more neoliberal commissioners opened the use of these projects to a minimal 5 per cent. They also achieved a guarantee that if this 5 per cent is reached, the target will be evaluated. In the meantime, Greens within the European Parliament have not really been critical against this proces. Given current dispolitics to achieve at least the Kyoto-targets (which are really low compared to the action that is actually needed to revert instability of our climate), the situation will be that the neoliberal lobby will win even more, possibly putting no cap on the use of CDM-projects.

Here is where Russia comes in as well. Russia, as well as the new European Member states, offer a cheap reduction market because they are very little "energy-efficient". Getting Russia into the Kyoto Protocol, broadens the market and creates more supply of carbon credits, lowering the price of carbon credits. Such policies and "market opportunities" will do nothing but anything about the dependency on the fossil fuel economy, by creating cheap alternatives instead of developing sustainable energy sources. On the contrary, it creates opportunities for the corporate sector to profit from small (efficiency)measures within the coal, gas and oil industry. It is a cheap way of profiting from technology which is already in place in Western European countries, by exporting it and getting money for doing so. It does anything but tackle the roots of climate change. It postpones real measures, giving corporations time to profit from climate change by creating an economic "win-win situation"; from an social-ecological perspective a dangerous path.

This comes clearly to the fore, evaluating the statement made by Italy that said fresh talks and technological cooperation could help shepherd Russia towards ratifying Kyoto. "The (EU) environment ministers have underlined the need to intensify technological cooperation programmes with Russia which could be included in joint projects planned by the Kyoto protocol", host country Italy said. According to corporate carbon analyst-bureau

Another scam is the use of sinks, trees and landfill projects to absorb CO2. According to research, sink is nothing but a hoax. But it is more likely that the member states of the United Nations will put a blind eye to these type of research. There is a lot to gain if sinks will be allowed to use as a "clean development mechanism". You would not even have to export technology to get cheap carbon credits! The most worse results of these sinks can be seen in eg. the Plantar project in Brasil (a steal-factory that wants to use industrial tree plantations that damage the eco-system >

http://www.sinkswatch.org). A new report from Carbon Trade Watch reveals a lot on this subject,

"Focusing on reducing CO2 emissions by using less fossil fuels and slowing deforestation is far more likely to help stabilise the climate than relying on natural carbon sinks", is one of the conclusions of a recent report published in the journal Science (

http://www.edie.net/news/Archive/7829.cfm). In the meantime, carbon sinks are also used to greenwash the conference itself, making it "carbon-neutral"

The dependence on the fossil fuel economy, also puts public opinion against measures to climate change. A recent poll states that 57 per cent of the British public believes that the UK "should not implement Kyoto if it will harm Britain's economy". Depency on gas and oil makes the world flip and creates a public advocating status quo. The poll is conducted by

http://www.populus.com/corporate/ and I found it on an environmental newssite, with banners from Shell on top, forwarding you towards a slicky greenwash web-page.