Police in Crete shot a 22-year-old Greek for not stopping at road block. 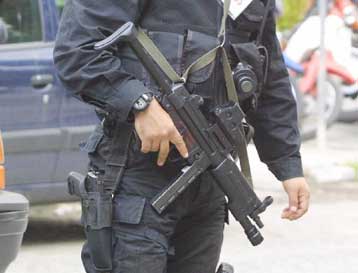 Police in Crete shot a 22-year-old Greek. The young man refused to stop for a standard police check and as a result he was fired upon at least six times. The 22 year old was carried to the local hospital and according to the latest news he is clinically dead. Yesterday evening a group of relatives, friends and as well as about 80 anarchists acting in solidarity attacked the local police station. Almost every window of the station was broken, two police cars were destroyed and six more severely damaged. Four policemen got beat up by the demonstrators. Six people were arrested and severely beaten up; they are now waiting to be charged. The police are still looking for another 7 people (possibly local anarchists) whose names they already know. There's also been some talk about closing down the local Anarchists squat