The last day of the WSIS saw the evaluation questions begining. Even the BBC reporters blog covering WSIS noted the lack of momentum and the general feeling of impotence within WSIS on Friday.

In central Geneva the anti WSIS demonstration organised for midday in the main shopping street next to the railway station was stopped by Police. As people began to gather a steadily growing number of police in riot gear stopped anyone they thought might be there for the demonstration and searched them and their bags, also checking and recording passport details and ID papers. It was a public show of intimidation, but people stood their ground. The numbers present were hard to estimate since the aggressive policing encouraged people to spread themselves down the street, but we reckon there were around 50-60 people (excluding corporate press and undercover police).

After a banner had been unfurled the police announced that the demonstration would not be allowed and that people must disperse. Shortly after the first arrests took place as three people who refused to show their ID papers were dragged and carried away. There then followed about half an hour where more people were dragged off [video] and pushing took place as the police presence grew until they had dispersed the crowd, they also confiscated banners and other items. There was a report of one man being beaten inside one of the police vans.

Two follow up protests took place - one at the train station where people covered their mouths to represent the silencing of critical voices - and another outside the police station where two of the arrested had been taken. Here there were reports of police charging at the demonstraters and dispersing them. There were something like nine arrests, but all were later released. Read report and pictures and audio: french report.

An immediate message of solidarity came out from the Civil Society end plenary session condemning the police repression and once again focussing attention onto the freedom of communication and expression, and the direct hypocrysy seen here in geneva (also see story 8 reporters banned after peaceful protest). It was later followed up by a Press Release and adopted within the official closing statement, which caused some trouble inside wsis and outside with police, as well as not a little confusion.

At the Polymedia Lab (see review) the High Noon video streaming continued (pic) and a radio show was streamed live from the Lab to Resonance FM in London (mp3 dowload) while more analysis and coverage continued to be published. As the WSIS was concluding so too was the Polymedia Lab, with the grand final gala Yomango dinner - people logged off from their computers and joined together for a fine communal meal, followed by a party (attended also by visitors from WSIS). By 2am the net connection was closed, the beer had run out, and the Palladium hall provided by the authorities was cleaned and cleared.

There will now be a process of evaluation on all sides, but what is certainly clear is that the WSIS has been (and has been shown to have been) a non inclusive summit, more interested in business than development issues. But while community media and communication rights were pushed out of the main agenda, their influence and agenda was everywhere. With the next phase set for Tunisia 2005 you can sure that the WSIS will remain controversial, and also that the links made here in Geneva will strengthen the growing movement around media justice and communication rights.

Audio: "Spontaneous" demonstration of "joy":
50 people from Tunisia gather outside the UN to show they joy about the next WSIS being held in Tunisia! (french) 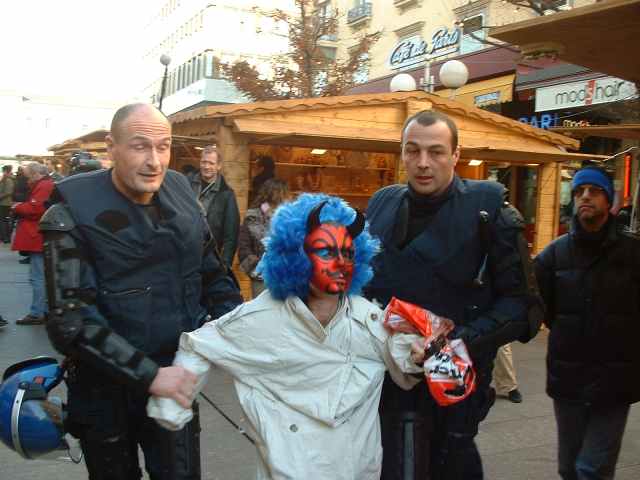