Asahi Glass Fluoropolymers of Thornton would dearly like the protestors to go away. They've laid on a nice injunction and found a pointless obscure spot for them to go to. They believed they've done enough having the pet cops of Fleetwood to back up their bully-boy bailiffs. So why are they still being exposed as being part of an animal torturing company which supports HLS? Why is everyone in Thornton learning to associate the name of Asahi Glass with paying for 6 week old beagle puppies being killed for a pointless chemical? 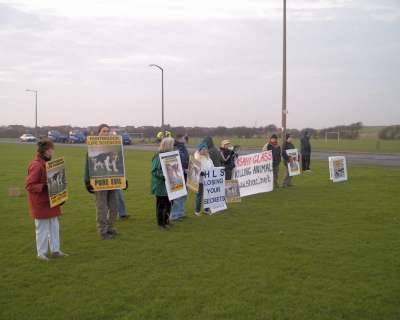 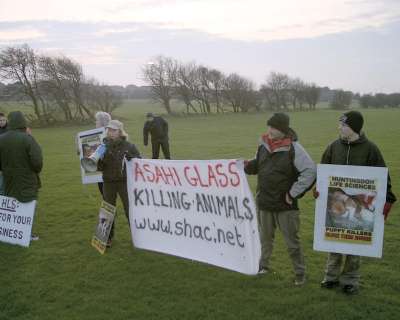 However, having been mislead continually, promised phone calls never materialising and Asahi Glass bailiffs waiting outside of the police station for the animal rights representatives, made us only realise that the police were only going to be as juvenile and corrupt as ever. We know you cannot trust this lot, but we felt that the underhand tactics of Inspectors Upton and Suet and Riley of the operations unit were low even by police standards.

So, we decided that until the police learned to behave like adults, why should we waste our time talking to them. So we switched our advertised demo from Monday to Tuesday. Unfortunately, the National Crime Squad neglected to pass this information onto the police in Thornton, leaving Upton, the bailiffs and co languishing in the freezing cold all Monday afternoon.

Instead, twelve activists from all over the North West turned up today, Tuesday, stood where we wanted - next to the crossroads, just outside of the injunction area but where everyone could see us. Ideal for informing the public and other companies on the industrial estate where Asahi Glass are based. Support was great with constant honking of horns. We were also very gratified by the response coming from the workers at other firms on the industrial estate. It seems that Asahi Glass are not very popular at all locally, and their reputation sinks ever lower.

Finally, two very sheepish looking CID cops turned up, annoyed they'd been dragged out in the cold, away from their cups of tea. And their was nothing they could do. Occasionally they tried to abuse the letter of the law, but we were ready for them. Eventually, after spending an hour pouring over the injunction they found a vague loop hole to stop the drum. And they were trying to tell us that they are being impartial! - Listen mates, when you lie, at least make it half-way convincing. Interfering in a civil dispute and cosing up to your bailiff mates only shows your true colours. It re-enforces the sensible notion that it's not worth giving you lot the time of day, let alone when we next plan to turn up. You had you chance for good-faith negotiations on this whole issue,and you simply kept repeatedly blowing it.

Meanwhile, Asahi Glass's bailiffs turned up from what ever rock they'd been hiding under. What a pathetic job they have, which they couldn't even do right. As it was, the injunction is completely immaterial, as we got the demo we wanted, without breaking it, not the garbage they thought they could land us with.

We will be back again and again, when and where of our own chosing. The bullying injunction is failing.