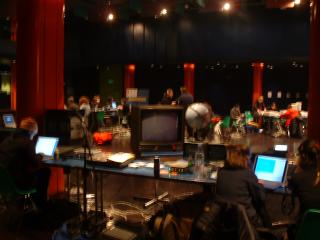 Wednesday 10th November saw the Polymedia Lab move into it's new location at Palladium, Rue du Stand 3, after successful negotiations with the authorities. People worked to set up the networks and equipment and we now have a fully functioning space where people are sharing and learning together and working on Creative Interventions (see pics 1,2).

Around the corner at L'Usine the Strategic Conference got underway a day late (pics). See reports from the following sessions: Hacklabs, InfoWar and Autonomous Media. The proceedings were streamed and the IRC participation and notes are archived. In Vienna there was also a banner drop reading "Save The Digital E-COLOGY".

At the WSIS itself and ICT4D exhibition continued (pics 1,2), news surfaced of an important intervention into the security regime of the UN Summit, where a group of independent researchers had spoofed the registration process to reveal how RFID chips were embedded in the passes and how delegates privacy is threatened by a security system that breaks the principles of the Swiss Federal Law on Data Protection, the European Union Data Protection Directive 95/46/ECand the UN guidelines concerning Computerized personal data files (See Press Release, Picture Story).

Meanwhile Radio Non Grata, a pirate radio station set up by Reporters Sans Frontieres after their exclusion from the WSIS was shut down by Police in France - where they were broadcasting from. RSF have over the past days been highly critical of both the WSIS (labelling it a "masquerade") and the UN (see report).

Tunisia, where the next part of the WSIS is due to be held in 2005, is fast becoming a very hot topic. Indeed both the RFID and RSF press releases mention it as a prime cause for concern. It has an appalling record on human rights and the freedom of expression, and currently the 2005 Summit is planned to be headed by Habib Ammar, under whose Ministry of the Interior torture of political dissidents was widespread. Reports have also come in from inside the WSIS Palexpo of the effective censoring of Terra Viva, a newspaper produced by Inter Press Service, which has been critical of Tunisia.

Other reports have also described how some exhibitors are refusing to be interviewed or filmed (including UNHCR and Microsoft - especially about the immigration registration kit), and how some activists have been prevented from handing out flyers inside the WSIS.