WE Seize! : Getting To Grips With Information Society

The Geneva03 "We Seize" Polymedia Lab ran from Dec 9 to Dec 12, and even a few hours before it closed its doors, people were still working on about 10 permanent work-terminals and 30 laptops. A few hours prior, the number of connected laptops had peaked at around 40. Within the same building, a radio studio and various video streaming boxes were continuously in action - including streaming a live radio show to Resonance FM in London where it was transmitted over the airwaves.

The Polymedia Lab was an experiment in free sharing of knowledge and software, cables, boxes and food, and in some cases even clothes. It came together despite initial problems on Dec. 9th, when the authorities suddenly decided that the project could not take place at the scheduled location by closing it down [pics]. Eventually, Geneva City Council provided the Palladium, a stylish culture venue. Strangely enough, when the council was asked for a space a few weeks ago, they were not able to find something, claiming that all spaces were fully booked.

All this was taking place at the same time as the official UN World Summit on the Information Society (WSIS) in Geneva, Switzerland. Throughout the week a video and audio stream was broadcasted worlwide by HighNoon. Activists demanded that the UN Summit addressed issues of intellectual property, human rights, the right to communicate, infowar, the rights to cheap generic medicine, and to free software as a model for technological development. Some of the issues addressed and debated, and projects put into practice in the Polimedia Lab included: Seizing... You can't beat the feeling! | All technology to the multitude | Free Software | Become the Media! | Switch TV! | Gasparri redux | We proclaim our precarious state | Pirate pride | WSIS Reload | Attention as a common good | Digital Denied | Intellectual Property | Reclaim the media - Reclaim the money | Small cybersoviets growing up... | Icome and action | Cielito Lindo | Hacklabs | Yomango

A one day event labelled as World Forum on Communication Rights also took place in Geneva alongside the WSIS summit on Thursday 11th. This was an independent civil-society led initiative, open to all seeking democratic, just and participative media and communication. This event was initiated by the Communication Rights in the Information Society campaign (CRIS), it is led by a coalition of international NGOs. 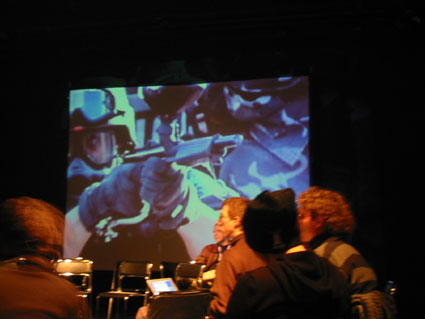 "WSIS? We Seize!" maybe hasn't quite seized yet, but it's got a pretty bloody good grip and won't let go! Whether it was taking the reigns of the cyber-horse between it's teeth, or biting the ankles of the techno powered elite, it was one more step in the process of appropriation of the communication tools and channels, the invention of more uses for these tools, and one more thread in the fabric of our social networks.

The debate about communication rights and intellectual highway robbery will continue, no matter what the second part of the world summit of the information society will put on the agenda. At the same time, this digital movement is growing, finding new allies, new ways of transforming ideas into action, refining techniques, sharing skills and increasingly making the international solidarity concept personal.