When Dictator is Booted from White House America Can Rebuild.

I find it very interesting that just a few days after the American appointed governing council in Iraq votes to begin a tribunal for Iraqi war criminals even though no constitution has been ratified that could legitimize any form of Judiciary in Iraq, Saddam Hussein conveniently shows up. 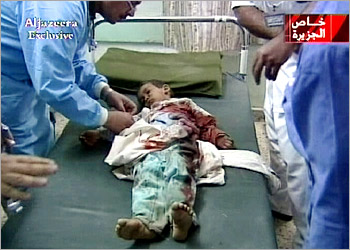 When Dictator is Booted from White House America Can Rebuild.

I find it very interesting that just a few days after the American appointed governing council in Iraq votes to begin a tribunal for Iraqi war criminals even though no constitution has been ratified that could legitimize any form of Judiciary in Iraq, Saddam Hussein conveniently shows up. The U.S. must of had Saddam Hussein on ice as the Bush regime pressed the governing council to put together the so-called human rights tribunal. The question I have is, if Milosevic can be sent to The Hague why can't Saddam? Unfortunately the murder of 30,000 plus Iraqi civilians in order to take control of the "oil" using Saddam Hussein as the demon that both Bush regimes focused on to distract us from the real goal, "oil", is a human rights violation comparable to any thing Saddam Hussein may have committed himself along with his regime members.

As the U.S. slowly inches its boy, Jordanian bank robber Ahmed Chalabi slowly but surely toward the presidency of Iraq and therefore toward the privatization of the Iraqi oil patch what we really woke up to this morning was simply just the completion of the removal of a man the U.S. put and kept in power. A man who the U.S. betrayed after he fought a proxy war against the Iranians on behalf of the U.S.. and according to our sources was ordered by the U.S. (the Bush/Reagan regime) to spray the Iranians in the marshes with a nerve agent called Tauban (NY Times) that the U.S. quickly flew to Iraq on military transport along with trainers all in order to prevent the Iranians from getting the upper hand in southern Iraq which would mean the fall of the Ramahla oilfields into into Iranian hands.

It only makes sense that the U.S. will try Saddam Hussein in this newly set up so-called human-rights tribunal in Iraq probably sentencing him to death with a U.S. hand-picked panel of judges. Just like Manuela Noriega, Saddam Hussein probably has enough evidence to put most everyone in the Bush/Reagan and the Bush/Quayle administration's in jail for the rest of their lives if Saddam Hussein and his inner circle were to be sent to The Hague.

The United States of America has never once answered for any of it as a human rights violations including slavery. Maybe now in this day and age of instant communication the world can finally point the finger at America for the genocide of millions. I just don't believe that the U.S. has the right to try Saddam Hussein for a hundred thousand Iraqi civilians until the U.S. answers for the genocide of 2 million Vietnamese in a world court described "illegal war". The U.S. must answer for the thousands that died as a direct result of the criminal drug dealing Contras and U.S.-sponsored right-wing governments in South and Central America. George H. W. Bush has never answered for the 10,000 Panamanians he murdered and then buried in mass graves on U.S. bases (ABC/NBC News?/The Panama Deception) in Panama when he invaded Panama to capture one man. If 6 million Jews can get some kind of justice why can't 30 million Native Americans murdered by germ warfare and direct U.S. military sponsored genocide at gunpoint. Not to mention the economic policies the U.S. forces on the world that have starved millions to death.

So who cares that they caught Saddam Hussein. Send Saddam Hussein to the Hague. We need to put the Bush regime in jail for crimes against humanity as well as for the high crimes of treason and corruption for they have subsidized their greed with the blood of America's youth and the innocent lives of the Afghan and Iraqi people.