The ESF is boring – stuck in its way – but the are real people involved and it will be a huge gathering of alternatives… here are some views from the meeting. 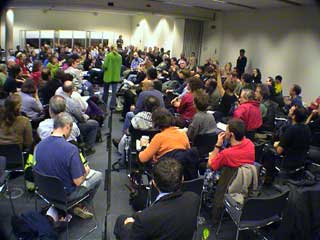 (Hamish) On a positive note the SWP/GR is losing control you can see as each speaks, the is a stony silences and the same small groups clap them… they gather in clumps to conspire… there agitation rises as more and more people speak out agenst them.

(Brig) Another positive note: the prevailing ‘tyrrany of structurelessness’ – the age old technique of those who maintain control by the lack of any structure to make them accountable – is on its way out. The practicalities working group quickly reached consensus that a defined structure and legal status are essential to the project, and proposals will be coming forward to the UK Assembly in January.

(John) Saturday mornining’s plenary session was totally chaotic with interminable discussions about where the next European Social Forum should be held. There seems to be a culture clash between ‘new movements’ and the traditional left.
Both sides need to learn from each other and accommodate to the other’s way of working and some people need to keep their egos in check.

(Richard) It’s been hugely positive overall. In terms of process there’s a conflict between two different models of democracy – representative and consensual, as symbolised by the Oxford initiative to put all the chairs in a circle. “Mysteriously” all the chairs had been put back respectfully facing the “platform” the following morning. Traditional meeting chairpeople did not know how to facilitate in a consensual way. People waffle rather than making proposals, etc etc. The cultural working group was really really productive and exciting. Talking to comrades from France and elsewhere was very useful so we don’t make the same mistakes, but just make our own.

just one question did the OXford initiative resurrect itself on sunday? :)

A need for Theory

An alternative view of the ESF.
I would like to thank Hamish for his comprehensive report.I would also like to thank the ESF meeting for allowing me to speak.

My self and George attended the ESF premeeting along with 50-100 others at the town hall.It was well staffed by the central committe of the SWP.I was briefly savaged by the attack poodle Alex Callincos.I dared raise the question that Mr Blair should Go and the troops brought home.Only the intervention of the meeting allowed me to conclude my point on the savage attack on the free Iraq Trade Union Centre.So much for democracy.

For those interested in undertaking support work with the Iraq people could I suggest raising the question with your groups. Several major trade unions, including COSATU in South Africa, the RMT in Britain, the Scottish TUC, the Italian metalworkers and the Italian CGIL have issued strong statements. All of this is documented -- with much
more information

George spoke well on pensioners rights,the repressive state and migrant labour.In fact he was clapped by the meeting.There were some excellent speakers from
France,Germany,Italy.Some of the points concerning the need to build activists links and to start more direct action against the war.There are some issues that people need to think through1.The role of Micro-Soft in funding the first Conference2.The attempt by the SWP and others to avoid political discussion.3The lavish praise and support for Ken Livinstone4the heavy repressive meeting and body searchs5.the holding of passports for translator sets which I am told is illegal.In concluding I would ask the SWP central Committee to practice what they preach.That is respect for alternatives and voices from below.
Pat 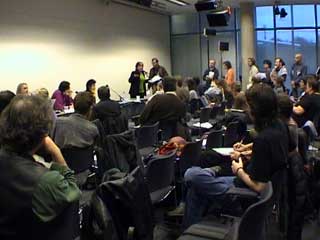 The was a consensus put forwarded at the planning meeting by UK IMC agreed that the Europe wide meeting (were to be held in cercals this was not respected so a small group of us got together and rectified this “oversight” during the lunch brake on Saturday morning. But some un-none trubbal makers put the chares back in the usual hierarchical form the next morning – we didn’t get up early unnof to rectify this act of social vandalism... Talked to the building crew and they didn’t put the chares back so it must have been some underhand anti democratic group acting autonomously with in the meeting… Back to the key subject:

The desishern to have the ESF in the UK was not a consensus desion in any democratically meaningful way. The consensus to hold it in London was a very bad consences, no space or time was allowed for alternatives instead the was a one sided hectoring from a small group who kept calling for affecerncey and nesserety which are on the surface very sensible suggestions but boring and disruptive in this early stage of consensus building. It was an imposed “consensus” by obstruction… the one advantage of consensus desione making is that it brings every one into the process and connects every one to the final outcome in this it is a very powerful tool for creative social change. So now WE are ALL left with a sullen and disconnected mob…

Constructive comments for moving on:

* respect differences of process and outcomes – some groups deal with money some with voluntary skills – some groups spend hours in hierarchical meetings some cunjer resources out of thin air – we need to equally respect and support both strategies and not dogmatically impose one agenda on a another which is a recipe for exclusion.

The ESF process can be a beautiful catalyst for exchange and social change – many people find it so… but the process of creating this space needs to be less dogmatically closed and boring.

More information has reached me of the difficulties that some delegates had of making their point.We need to work towards a wider and deeper understanding of the forces at work .Further info at

http://www.newsandletters.org/http:/ and in the UK that of members.aol.com/THEHOBGOBL for further info email