4 anti GM activists ordered to pay up to £1000 court costs each for attempting to prevent planting of GM field trial ... 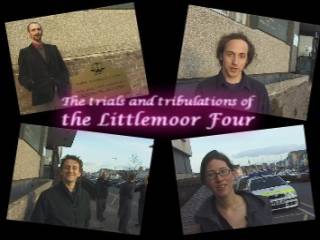 On 15th December 2003 a District Judge in Weymouth, Dorset found 4 anti-GM activists Liz Snook, Olaf Bayer, Richard Whistance and Will Hart guilty of aggravated trespass for attaching themselves to tractors in an attempt to prevent the sewing a farmscale trial of GM maize near Weymouth in May 2002. The four were given conditional discharges lasting 18 months, 1 person was ordered to pay £250 court costs and the other three were ordered to pay court costs of £1000 each.

Yesterdays guilty verdict and sentencing marks the end of a drawn out and contradictory legal process. In March 2003 all 4 activists were cleared of aggravated trespass by the same District Judge. At the original trial, he commented that the four had acted in a "reasonable" way and said "I can see you all have huge knowledge of GM crops and I can see you were acting to protect the land and animals."

However, in November 2003 following a successful appeal by the Director of Public Prosecution, 2 high court judges overturned the District Judges earlier decision, and ruled that the four activists should be sent back to the magistrates court with an order to convict and sentence and them.

for more information on the Pink Castle action go to
www.sayhi.to/thecastle