A rally was held on December 9, 2003 by Students for Freedom and Democracy in Salt Lake City, Utah to protest fraud committed by Azerbaijan's government in the country's October 15 presidential election and the arrests of opponents that followed. 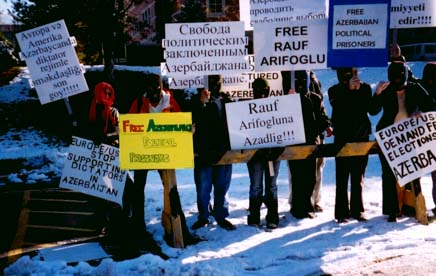 Repression is the same in any language 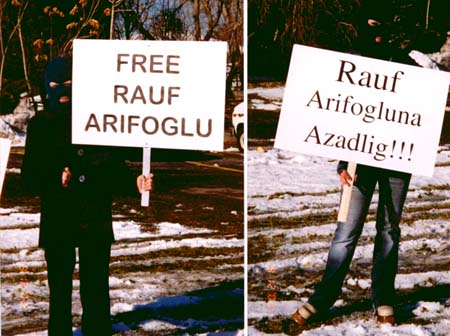 Release all political prisoners in Azerbaijan 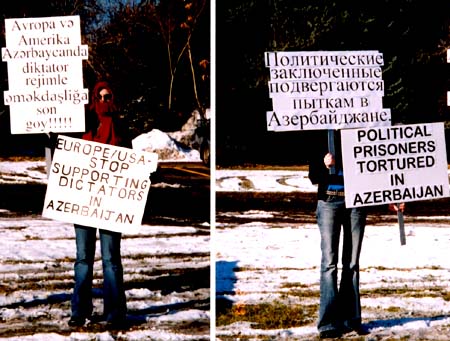 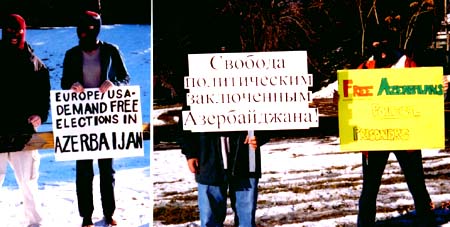 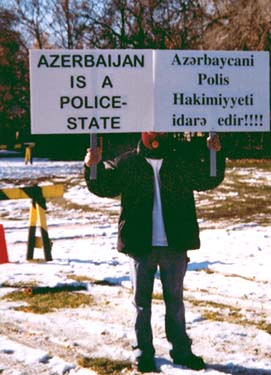 Members of the ad hoc organization, Students for Freedom and Democracy (SFD), held a rally on December 9, 2003 at 1200 East 1800 South in Salt Lake City, Utah to protest the recent presidential election in Azerbaijan. According to SFD spokesperson Krystal Powell, Azerbaijan's government was charged by international observers with conducting a fraudulent election this past October 15.

During the gathering, participants focused on taking photos of their signs written in English, Russian and Azerbaijani. "The signs contain our message," Ms. Powell stated, "that election fraud of the magnitude committed in Azerbaijan last October reflects the actions of a dictatorial government, not a budding democracy. Holding an election by itself does not create democracy."

When asked about signs that referred to a specific person, Rauf Arifoglu, by name, Powell explained other issues behind the rally. "The worst part of this whole election actually has been what came after it, meaning over 1,000 questionable arrests of the government's most powerful political opponents. Mr. Arifoglu was one of the government critics who was placed in jail."

Ms. Powell continued. "Before his detention, Mr. Arifoglu was editor-in-chief of "Yeni Musavat," the country's largest daily paper, and an editorial opponent of the government. His arrest is important, because if Azerbaijan's government is willing to jail well-known members of the press, with all the international embarrassment that creates, and there has been noise made about Mr. Arifoglu's situation, then we shudder to think what that regime would do to average people who oppose it. And anyway, there's good evidence that at least two notable arrestees have already been tortured."

Finally, when asked why demonstrators covered their faces with scarfs and ski masks, Ms. Powell pointed out they did that as a symbolic act. "The people of Azerbaijan, as well as many other countries, aren't able to speak out and really be themselves when it comes to politics. They have to wear masks at all times when dealing with their government, otherwise they'll face punishment and perhaps even torture. By covering our faces, we're trying to reflect the indignity they suffer on a daily basis."

Protesters disbanded after about 45 minutes.


For a more extensive interview with Ms. Powell about the situation in Azerbaijan and additional photos, please go to:

Please go to the following locations for corroborative and additional information on the issues mentioned in this article: