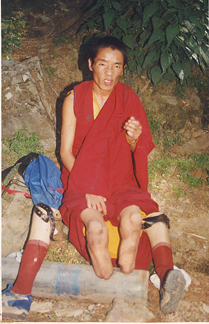 Photo by Lobsang Sang Topgyal, a Tibetan living in exile

In October of 2003, the Tibetan Photo Project received its first e-mail from Lobsang Sang Topgyal. He is 23 and a former monk. Lobsang has been documenting the lives of Tibetans. We are presenting this story and photo as we received them and without correction to language or spelling.

"Story about them Monk niyma from Tibet to India by a walk in 45 days , he come for education and to meet dala lama .india is better for studies. But for Chinese gov , does allow to our culture, but that time , he traveled in snowy weather for 15 days , his cloths were wet and with him their were two friends and due to bad weather the fell sick. And they were unable to walk. Then they enter into India military area. When he reached their his legs were injured due to cold whether , .and he was taken to hospital by Indian army, and their was no cure , so his legs were separated from his body. He stayed ion hospital for long period and did not get good treatment.when he wake up he found his both legs were missing, he feeled very bad , and he though why did he come from Tibet Tibet India.due to depression he was mentally disturb.then he was send to delhi and from their to dhrama shala by tibet government.then he was send to school and I did counseling , and studied mental health care for one year in dhrama shala. And I do counseling to Monk Niyma and he was also helped my two doctors eva and enolena from Holland. Now kusho nimya is in dhrama shala osger school and he still a monk. I just no this much and I will send more information as I recived about him."