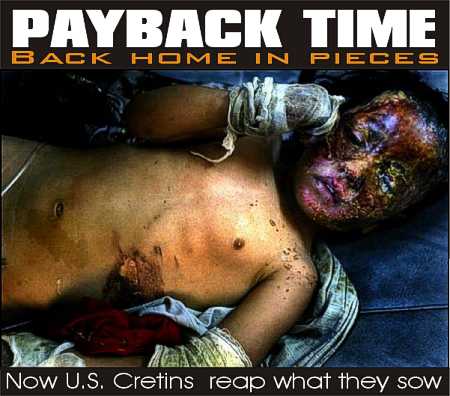 But salvation is coming by Berlusconi a loyal italian vassal. He has blamed today 'muslim terrorists' that they have tried to kill the nice mellifluous pope whose last epiphany is a europe as a theocracy like his catholic fundamentalist Polish homeland and like prudish United States. This is the sheet anchor par excellence. Christian fundamentalists from U.S. and Europe will save the occident from muslim danger. Let's make a religious war and all european disbelievers will be present on the continuous raid.
Armed with car bombs, mortars and machine guns, resistance fighters launched four well coordinated attacks, three against camps of the multinational despoilment coalition and one against the building of the puppet administration of Karbala in the southern city of Karbala on Saturday. The attacks also wounded at least 172 people, with U.S. Army Brig. Gen. Mark Kimmitt saying 37 of them were coalition myrmidons, including five U.S. tantalizer. Some 135 Iraqi collaborator police officers and civilians also were wounded, said Ali al-Arzawi, deputy head of Karbala General Hospital. Ass wide open and out of control

So now everybody should realize that iraqi resistance never was lead by Hussein, only a Bush-Regime fake to blame resistance as 'terrorists'. It has simply grown up to a national Iraqi movement by permanent exercise of mischief, deprivation of liberty, heist and homicide. Only a genocide on Iraqi folk will stop it and Americans have practice, three million times carried out in Vietnam. Who will be the next evil leading this 'terrorists' - Syria, Lebanon, Iran the ugly French who tried to send suicide Air france bomers to US homeland or the ominous mastermind Bin Ladin the half-dead punching bag who leads all 'terrorists' in Iraq with morse on a dead wire from his afghan hole. This fake president is a dirty murderous liar and the Americans are on a mad cow disease trip so nothing will be happen and the Iraq will be drowned in blood and genocide