It was at this point that several witnesses report seeing what appeared to be excessive physical violence done to Anthany by police officer(s): “When I saw him being punched it made me feel sick.” It is alleged an officer said, “When I tell you to roll over, you fuckin roll over.” Witnesses also say police appeared to be joking and laughing as they stood behind the ambulance once Anthany had been put inside. 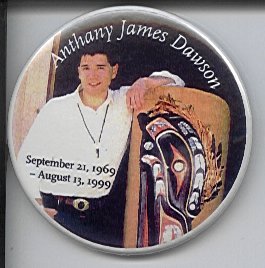 August 11, 1999
Mid afternoon: Anthany got into his car and headed for home to meet his mother. He was fit, in good health and with no injuries to his body. Near Victoria High School Anthany seems to have pulled his car over and at approximately 4:30 phoned and left a message for his mom saying he was on his way.
We do not know what happened from the time he called his mother until the time the first 911 call was placed.
At Stadacona Park Anthany was seen clutching his head as he walked. He was moaning and groaning and seemed to be in great pain. He appeared to be extremely hot and started to remove his clothing and run in and out of rush hour traffic. He fell to his knees and toppled over several times finally collapsing at Davie Street and Oak Bay Avenue in front of a number of businesses.

It was at this point that several witnesses report seeing what appeared to be excessive physical violence done to Anthany by police officer(s): “When I saw him being punched it made me feel sick.” It is alleged an officer said, “When I tell you to roll over, you fuckin roll over.” Witnesses also say police appeared to be joking and laughing as they stood behind the ambulance once Anthany had been put inside.


It is at this point where Anthany’s medical distress became secondary to the possible view it was just another drunken Indian being beaten up by police.


It is at this point we have to ask ourselves whether the actions taken by the professional medical and law enforcement officials were at their best?


We need to question whether Anthany received adequate medical attention. Did his ‘racial’ identity and gender play a part in decision making? Would it have been different if this had been a white middle class woman? These are the types of questions that have arisen through the persistence of Anthany’s family to find out the reasons why Anthany had to endure this brutal death.


He remained in a coma after being placed on life support August 11th. Forty-eight hours after his first interactions with the medical team and police, Anthany James Dawson’s life support was turned off at 4:21pm, August 13th, 1999.


This should never have happened to him, it should never happen to any family. The coroner’s jury found that he died of anoxic encephalopathy with tonsillar herniation due to restraint-associated cardiac arrest, agitated delirium and hyperthermia die to episodic metabolic crisis and positional asphyxia. In English, he was choked to death during a seizure. Contrary to media reports, Anthany was not drunk or stoned. He did not die of an overdose or a simple heart attack. A toxicology report found very minute amounts of marijuana in his system that was five days old.


Nancy Dawson has continued to push for justice for everyone experiencing discrimination of all kinds. She is seeking a public inquest into Anthany’s death. Her family is still in need of support to find out what happened so they can begin their healing journey and eventually to have closure. Would we as parents have done anything different if this had happened to our child?


If you have experienced any kind of discrimination don’t be afraid to exercise your human rights and seek help from your local MLA, anti-racism centre, the human rights coalition or your family church.


racialism (ray-shal-izm) n. 1. belief in the superiority of a particular ‘race’. 2. antagonism towards people of other ‘races’.
racialist n.
racism (ray-sizm) n. 1. = racialism. 2. the theory that human abilities are determined by ‘race’. racist n.