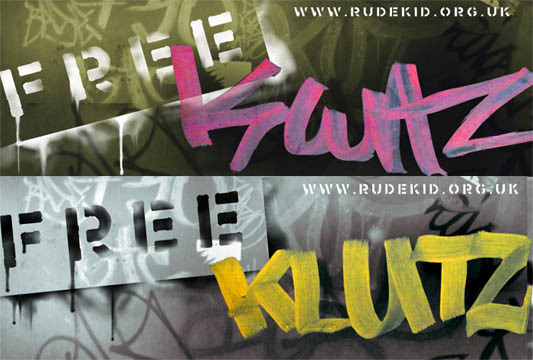 As you may have heard, or read in the papers before Christmas, one of Manchester's street artists Klutz (aka Jack Jones) has been sent down for six months for painting trains. He is just seventeen years old and has no previous criminal record. This sentence is far tougher than those often dished out to people who have killed people drunk driving.

It may seem an odd cause to take up, and you may think there are people in prison for much more worthy things than tagging, but nevertheless it is one more notch in the overall strategy of cleaning up the city so it can be sold to the highest bidder. The Manchester Evening News has been stirring things up too – they applied to the judge to get a minor's name and address printed in the 'public interest', scapegoating Klutz further.

This jailing and the media attention is all part of a wider crackdown in Manchester. In making an example of Klutz, they hope to deter other graffiti artists. Will the threat of massive sentences end up preventing people like you from painting you protests on, God forbid, a wall? Lets not let them wipe all the street culture in this place, just to make it look saleable to yuppies!

Want to know how you can sweat to show your support for Jack Jones and lodge your protest against the sentencing? Well…

One of the best ways is to write to Klutz himself, to help keep his spirits up while he's on the inside. He's asked us if you can do this by emailing him via

Want To Do More?

Another way would be to get out there yourself. If you're a writer - get sweating writing up KLUTZ or FREE KLUTZ (or 3 KLUTZ as Jack suggests). It's probably not such a good idea to try and imitate Klutz's tag if you aren't a writer (poor copies of your tag are very depressing to see!) so we've made some stickers with his tag on that you can put up. (See link?) Also a stencil is on its way soon.

How Does Writing his Tag Help?

Apart from cheering Jack up, writing his tag up while he's locked away scuppers their ability to pick up Klutz for any more works without actually catching him in the act · if his tag goes up while he's obviously locked up there would be evidence that his tag has been used by other people. The cops strategy rests on the principle that taggers only use their own tag. If we produce precedents whereby anyone could be writing anybody's tag, it could help screw their future plans for us all.

He says his work is an art form, which is important to him and many others who share this view. It is unacceptable to reserve all avenues of expression for corporations with there millions, at the same time jailing those denied the opportunity to communicate their message because they aren't rich. There is no profit in making street art - it is created purely for the young and the appreciative.

Remember they're your streets!