EZLN 10 Years After, The Struggle Continues

The 1st of January 2004 marks the tenth anniversary of the Zapatista Army of National Liberation(EZLN) uprising in the state of Chiapas, southern Mexico, and 20 years of modern Zapatismo. Under the campaign "El Fuego y La Palabra - EZLN 20y10" (The fire and the word), thousands of indigenous and non-indigenous peoples of Chiapas, Mexico and all over the world, have been remembering and celebrating that early morning of 1st January of 1994, when an army of primarily indigenous people shouted Ya Basta! (Enough!) whilst taking over San Cristobal de las Casas and several other major towns of the state of Chiapas. With that rebellion, the Zapatistas not only declared war on the Mexican government, but also to NAFTA, the free trade 'agreement' that went into effect that same day, and which, the rebels claimed, "it meant death to indigenous peoples".

Throughout the following decade, the EZLN has been a key reference for anti-neoliberal and anti- racist struggles around the globe. The Zapatistas have not only injected the anti-capitalist and anti-globalisation movement(s) with notions of horizontality and direct democracy as a way of organising and operating, but they have also consistently pointed out the need for autonomy and diversity within a global 'movement of movements', made up by a civil society that has many different faces, voices, ways of expressing and modes of being visible.

Click at the link below for full feature, which includes reports and photos from the cellebrations in the rebel Zapatista territories, as well as in other parts of the world. It also includes background information and links to the recent developments in the Zapatistas struggle. 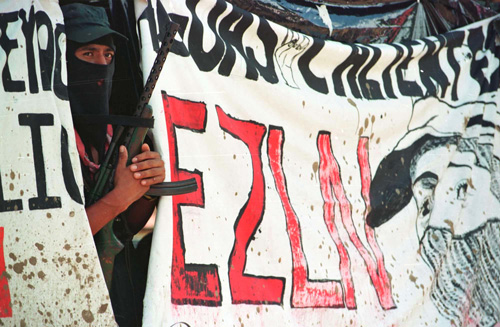 To mark this anniversary, the Chiapas Indymedia Center has produced a 30 minute long radio program which reviews the history of the EZLN, the Zapatista autonomous communities and the Zapatista support bases. The 'EZLN 10 Years After' audio document includes interviews and recordings (in Spanish) of some of the key players in the EZLN, as well as audio from the major events of the last 20 years of global Zapatismo. Listen in Real Audio or MP3.

During the evening of the 31st December 2003, as well as during the 1st January 2004, a series of celebrations took place in each of the 5 Zapatista Caracol centers in Chiapas. These were modestly attended by the EZLN and Zapatista communities rank and file, and somewhat more generously by national and international supporters. The Zapatista caracol of La Realidad became one of the major focus of these celebrations in the rebel Zapatista territories, where hundreds of people gathered to dance and listen to radio broadcasts by some EZLN commanders in clandestinity.

Meanwhile, in Oventik, a communique by the EZLN was read at midnight of the 31st December. Amongst other things it stated: "Today we are gathered to commemorate the 10th anniversary of the armed uprising of the Zapatista Army of National Liberation because this is the most important part of our great history as indigenous peoples. Because this was the moment when the zapatista indigenous peoples declared war against being forgotten, against discrimination, against the plundering of our natural resources, against exploitation and oppression, and against all types of injustices that we, the indigenous peoples of these lands, have been suffering for more then 500 years..."
Read full communique in Spanish.

For more background information in English, and recent developments of the Zapatista struggle see the links below: