911 a picture of truth in Action

This is truth in action, and a few criminals in Washington cannot stop the truth from reaching the light of day! 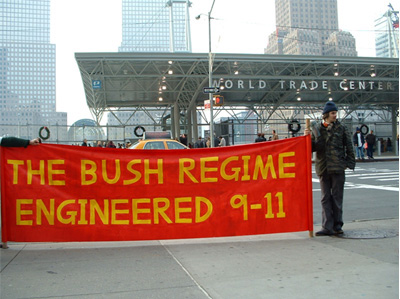 I've been thinking a lot about the incident in New York city I posted about where a group unfurled a large banner that simply said: "THE BUSH REGIME ENGINEERED 911." Bystanders had a mixed reaction to that and I guess the police eventually shooed them away, but the organizers said more people were for them than against them. The group is called "911 TRUTH MOVEMENT." Here's the original post about that incident.


What I kept thinking about, other than admiring this simple but powerful action, was what if this group started doing this one simple thing in every major city in the country? Of course this event was not covered by the mainstream news, but it hit the alternative news big, and I was wondering if this same banner started being unfurled all across the country, day after day, could the mainstream media continue to ignore it? Would it not become newsworthy by sheer number of occurences?

What struck me about this activist action is that it was so simple. Just unrolling and holding a banner in a crowded city. That's all they did. The impact came from the words on the banner because they are words nearly everyone has thought but very few have had the courage to say in public. The words are taboo, and hence they have immense power in a public situation. It is if, as a nation, we have all agreed to go along with the lie, because the truth is more than we can bear. The truth, if it came out, would tear the nation apart.

Then this group decides to just put the truth into the simplest of words and unfurl the words on a banner. There is no law in the United States that says you can't put some words on a banner and stand there in a public place holding your banner. This is a clear matter of free speech. The group, in a way, was testing our current situation regarding free speech. How much free speech do we have left? Are the words "The Bush Regime Engineered 911" illegal now? Can a set of words be declared illegal? I started thinking that I hoped this group would start doing this simple little thing in cities all over the country. Let's find out if it is now illegal to speak these words in a public place. These words have so much power, I think, because the whole nation, by now, has them in the back of the mind but is afraid to utter them.

I think this group did a very bold and daring thing, but why should it be considered bold and daring? Because we have already lost so much of the atmosphere of free speech. Writers are afraid to write what they think. They realize that the regime is ruthless and has put itself above the law and above the Constitution. The people have become afraid, not of terrorists, but afraid of their own government.