"If you only see one case this year make it this one!" Mark Thomas 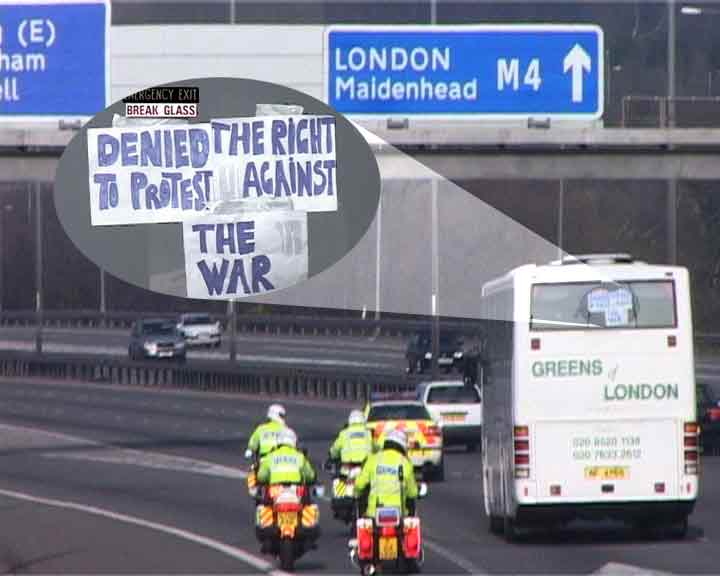 one of the coaches forced back to london


On Thursday 15 January 2004, the High Court will consider the lawfulness of police containment tactics before an anti-war demonstration last March. The two-day hearing will focus on events near RAF Fairford, Gloucestershire, but will have a much wider impact: the would-be protestors argue that the Human Rights Act prevents the police from relying on ‘common law powers’ to detain them. And the police are taking the challenge seriously, recently hiring two QCs at considerable cost to themselves.

On 22 March 2003 three coaches of about 150 peace campaigners were prevented by the police from attending an anti-war demonstration outside a US airbase at Fairford. Police stopped and searched the coaches about six miles from their destination. Officers claimed that the items seized during the search led them to believe a breach of the peace would occur at the airbase. These "offending articles" included white paper overalls, scarves, some plastic toy soldiers and a frisbee.

Officers then forced the coaches back on to the motorway and surrounded them with police vans and motorcycle outriders all the way back to London. Some of the passengers dialled 999 to report that they were being kidnapped but were told they were not being detained and were free to go where ever they liked. However, attempts to negotiate even a toilet break were rebuffed. One woman passenger had to resort to urinating into a sandwich box in full view of police with video cameras.

About 60 of the passengers are involved in the legal action. They claim that the police's actions breached articles of the European Convention on Human Rights, guaranteeing freedom from arbitrary detention, the freedom of speech and assembly, and respect for physical and psychological integrity.

One of the passengers commented that:
"It is vitally important that people can protest freely, especially about a war pursued without legal or moral justification."

John Halford, the solicitor at Bindman & Partners who represents one of the passengers, said:
"that the Police should consider it lawful to forcibly detain and frustrate the democratic right to protest of 120 people who had committed no crime whatsoever… on the grounds that some of them were wearing white suits is barely credible…Policing of this kind can have absolutely no place in a democratic society."
Demonstration: 9am-10am, Thursday 15 January 2004
outside the Royal Courts of Justice, The Strand, WC2.

1. Fairford Coach Action is the name of the group of about 60 passengers who have collectively decided to pursue a Judicial Review case against the police's actions on 22nd March 2003. Full background information is available on the website. Visit the site for links to related web articles, and testimonial statements.

2. On the 22nd of March 2003, three days after the start of the US/UK war on Iraq, a demonstration, 'Flowers for Fairford', organised by the Gloucestershire Weapons Inspectors (GWI) attracted over 3,000 protestors to the airbase. Local groups organised transport to Fairford from 37 locations across the UK. One other coach (from Swindon) was also turned back by the police.

3. American B-52 planes flew from Fairford airbase to bomb Baghdad (see www.fairfordpeacewatch.com ) and Fairford was the site of excessive policing during the war on Iraq for further information about RAF Fairford). GWI, Berkshire CIA and Liberty have issued a dossier relating the experiences of protesting there. The report, "Casualty of War - 8 weeks of counter-terrorism in rural England", documents how section 44 Terrorism Act 2000 stop and search powers were misused. See

4. The Human Rights Act 1998 came into force in October 2000. It requires the police and other public authorities to avoid breaching key European Convention Human Rights Articles save where legislation makes this impossible. Amongst the key rights are Article 5 (deprivation of liberty must be justified in accordance with a procedure prescribed by law and on one of the five grounds listed in paragraph (1) of the Article), Article 8 (which requires justification for interference with private life, including those which impact upon physical and psychological integrity), Article 10 (freedom of speech and expression) and Article 11 (freedom of assembly).

5. At common law a constable may arrest a person without warrant who he or she reasonably believes will commit a breach of the peace in the immediate future, even though at the time of the arrest such person has not committed any breach. This power is subject to a number of strict restrictions, however: the belief must relate to an act or threatened act harming any person or, in his presence, his property, or which puts a person in fear of such harm; the belief must relate to the likely actions of the particular individual or individuals against whom the power is used; and when the particular individual is acting lawfully at the time the power is used, the threat of his committing a breach of the peace must be sufficiently real and imminent to justify the use of such a draconian power.

6. Interviews with passengers from the coaches can be arranged (please enquire - see contact details above). Dramatic, high-quality, digital video footage and photographs are also available. Permission to use them will be granted on a case-by-case basis (rates vary). Contact Dave Jones on 07779 599 560.