WSIS - World Summit on the Information Society - Who Seized?

An evening to report back from the World Summit on the Information Society in Geneva and the We Seize initiative - and to discuss further participation / interventions / activities in the field of communication rights. 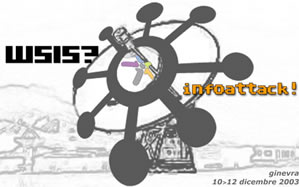 We'd like to invite those who were there and/or are interested to take communication rights activities further to come together in Limehouse Townhall on Friday 30th of January - to share experiences and information and to create some uk-based synergy for the issue. Some report backs are already scheduled, others will hopefully happen in an ad-hoc way. Please bring your pictures / slideshows / notes along.

A two years campaign under the label "media democracy" preceding the summit has helped to put "communication rights" on the agenda of social movements, but far from the central agenda of the official summit.

The summit itself was an interesting process: The tension between the corporate involvement and the development agenda, attempts of Civil Society groups to influence the official summit and their partial exclusion from major forums. The "We Seize" initiative to create an autonomous diy space in Geneva during the summit, complete with conference, polymedia lab, v2v video project and police raid. The dynamics between approaches from "inside", "outside" and "in-between crossovers".

We feel a strong need to take the initial discussions further, to develop various forms of political articulation to put in practice before, during and after the second part of the summit in tunisia 2005.

Themes for debate and presentations:

- Roundup of the official WSIS process from a civil society point of view, inclusions and exclusions, positive results, frustrations and consequences.

Despite the liberal rethorics of the official WSIS, development issues were effectively excluded from the agenda, as were Reporters Sans Frontieres who set uptheir own pirate radio station as a response . However, civil society groups both held their own events including the "World Forum of Communication Rights" and produced their own significant declaration "Shaping Information Societies for Human Needs".

- "Inside and Outside": The "We Seize" initiative created an experimental media space in the city of Geneva, complete with "Polymedia Lab", a "Strategic Conference" and a V2V video project. The Polymedia Lab was evicted by Swiss Police, which caused a one-day delay for the We Seize "strategic conference". Is it worth the trouble to focus on "outside" events - are they an effective form to develop and articulate our politics?

- Political articulation: Communication Rights is not yet an issue which brings thousands of people to the streets, but a good number of pressure and lobbying groups are active beyond the thousands who engage in garss roots communication. The WSIS provided a rallying point for these groups to join together in a collective process. There were also a number of culture and reality hacks as well as mini actions and protests. Where to now?

- A number of groups are also working on connections between the struggles for Free Movement and Free Communication - does this work on an analytical and practical basis? and how?

This event is presented as part of a weekend of Indymedia London convergence events. The following day on Saturday 31st at the same venue there is an afternoon and evening devoted to developing ideas and practical initiatives for a new Indymedia London project. Further details at: