Friday 16th Jan: A Judicial Review at the High Court yesterday began proceedings considering the lawfulness of the police actions last March when around 150 anti-war campaigners were 'coachnapped' - stopped and searched for almost two hours on their way to demonstration at RAF Fairford, then forcibly returned to London under police escort (pics). As the protestors put signs in the coach windows saying "Help We've Been Kidnapped" "Call the Media" and "Denied The Right To Protest The War", the police closed the motorway behind the coaches while police motorcycle outriders blocked motorway exits (see old report).

The campaigners claimed the police overstepped their powers and furthermore that they breached articles of the European Convention on Human Rights, guaranteeing freedom from arbitrary detention, the freedom of speech and assembly, and respect for physical and psychological integrity.

Police statements revealed that at 10.45am an order was issued by Chief Superintendent Lambert to stop and search the coaches including instructions for the coaches to be turned around and escorted non-stop back to London if any 'dangerous items' or items likely to be used to conceal identity were found. It is this order that will now be scrutinised. Michael Fordham acting on behalf of the protestors said the police were within their powers to seize certain items, and that they even possibly had the right to detain certain individuals under public order and common laws, but they overstepped the law and infringed both common law and human rights law, by the blanket nature of their action (despite intelligence notes showing that the police were aware that the coach passengers were made up of individuals and members of various groups) and the way evidence was used in an attempt to justify this.

The case continues today at the High Court and a decision is expected from Lord Justice May and Mr Justice Harrisonin in around three weeks time. 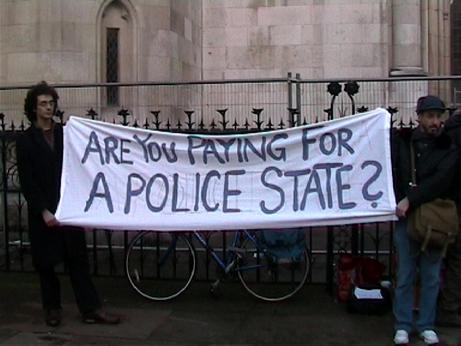