Martin Shaw is the activist who narrowly escaped death when the Swiss police cut the rope he was hanging from, in an attempt to blockade delegates attending the G8 summit in Evian, eight months ago. He will be in Leeds and talk at the next Leeds EF! monthly meeting, on February 4, 19:00 at the Adelphi Pub. A video will also be projected. All welcome! 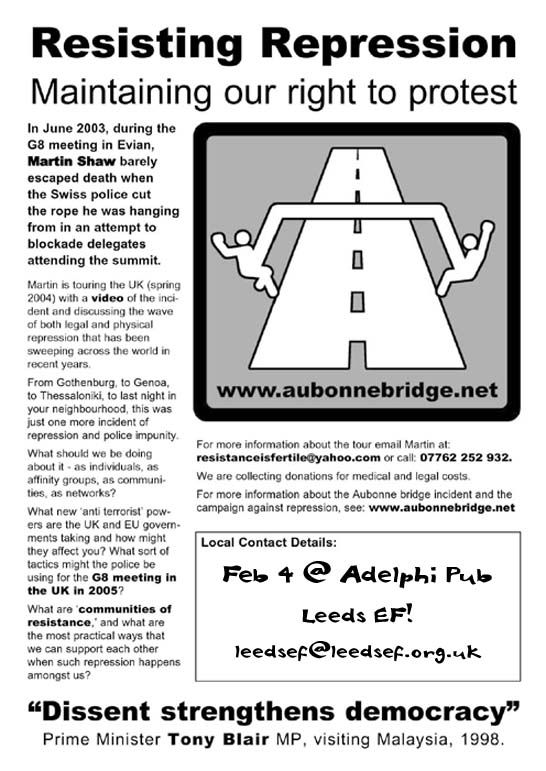 Eight months ago during the G8 in Evian, Martin Shaw narrowly escaped death when the Swiss police cut the rope he was hanging from in an attempt to blockade delegates attending the summit. Martin is now touring with a video of the incident and discussing the wave of both legal and physical repression that has been sweeping across Europe in recent years, and trying to stimulate ideas of what constructive steps we can take in the face of it.

From Gothenburg, to Geneva, to Thessaloniki, to last night in your neighbourhood, this was just one incident of repressive impunity among hundreds from the powers that be. What should we be doing about it - as individuals, as affinity groups, as communities, as networks?

What is the new legislation and how does it affect you? What sort of tactics will the police be using for the G8 in the UK 2005?

What are "communities of resistance," and what are the most practical ways that we can support each other when such repression happens amongst us?

For more information about the tour email martin at resistanceisfertile[at]yahoo.com or call 01865 241097

For more information about the aubonne bridge incident and the campaign against repression, see http://www.aubonnebridge.net