Riot police stormed the autonomous, indigenous town of Tlalnepantla, south of Mexico City, in the early morning at 1am last Wednesday, 14th of January.
Eye witnesses talk of at least 2 deaths, a dozen injured and a dozen missing persons, and of widespread police brutality and intimitation.

GREG BERGER, independant reporter and documentary film maker in the Interview [ audio | 128kbs stream | 250 kbs stream] with Democracy Now!
“An armed incursion by the state police of about 1,500 riot police stormed the town. There were snipers placed on buildings, a rain of bullets fell on the people who were holding the city hall as an autonomous municipality, and at least two people were killed. Many people were beaten. I personally spoke with several old women who were beaten in the face and body by the riot police. Many of the people from the town ran into the hills and are currently being chased with helicopters and police dogs through the woods. And the entire town is basically in a state of siege.” 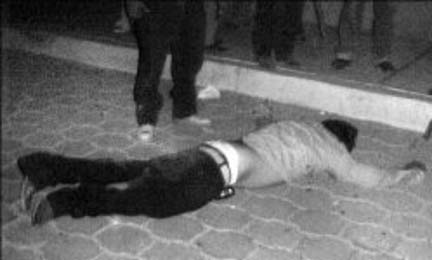 According to SF Bay Indymedia, human rights observers have also been attacked and injured by riot police when trying to evaluate the situation days later.

The attack followed the town's “Declaration of Independance” on Sunday, January 11th, when the inhabitants of the municipality of Tlaneplanta in the state of Morelos gathered in the public square to set up the People's Autonomous Council. [Chiapas Imc]
The town hall had been occupied by protesters since 1st of November 2003. The traditional way of selecting the towns major by an open council of all adults was abolished by the states electoral committee last July 2003. The winning candidate was very controversial and unpopular; not only because just 10% of the entitled voters had given him their vote, but also as a political boss who has been accused of corruption in other political offices he has held. The majority of the towns inhabitants decided to ask for the election results to be annuled and their former process to be legally recognized.

Tlaneplanta is widely known as one of the main places for producing nopal, an editable cactus, which is substantial for Mexican food. It is not only traded in Mexico, but a high percentage of nopal produced in Tlaneplanta is exported to the US. Trade negotiations in Monterrey, Mexiko, were coinciding with the attack on the town, as the same day, a trade summit of the American countries including talks about the Free Trade Area of the Americas took place.