WEF Starts With Demonstrations And Blockades

Its start on the 20th of january was accompanied by a variety of protests, despite the policy of "Arbenz". The policy recommended by "Arbenz" is an integration and segregation strategy for the purpose of more control of WEF - protests, it tries to subdue NGOs and WEF critical organisations by giving them a chance of presenting their concerns to a small number of WEF delegates in Davos, in return for a "non participation" at the protests against the WEF on the streets, so in order to make it easier to justify a forcefull repression.

For up to date information see Indymedia Switzerland 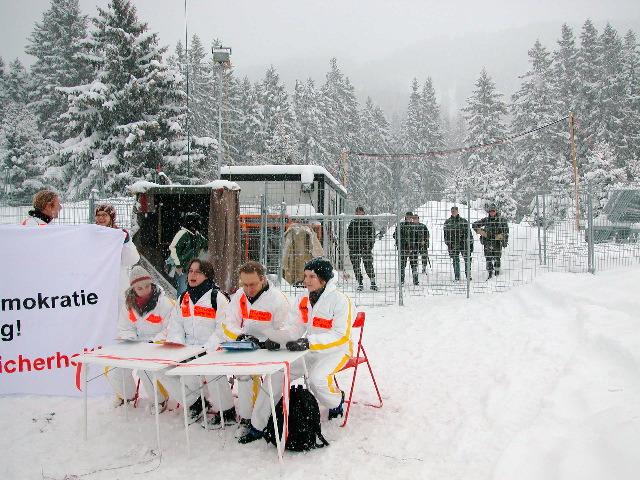 Zürich
11:45 :: barricade on a bridge causes a traffic jam
14:45 :: 50 activists block WEF associated companies in the inner city of Zürich
15:45 :: spontaneous demonstration against the WEF in a prominent spot
16:10 :: the people blocking the airport arrive back in town
16:55 :: quick demo passing the stock exchange
18:20 :: "Radio-Ballet" as part of the resistance in a particular street with about 200 - 400 peoples finishing with a spontaneous demo.

Airport Kloten
12:30 :: 50 activist block access to the WEF- information desk at the airport
13:45 :: 200 persons block the access to the motorway at the airport [pictures 1+2+3+4] and the smaller street to block the traffic
14:05 :: smaller street not blocked anymore, police start dragging away activists at the motorway access
14:40 :: police has moved the blockade :: one arrest
15:00 :: 200 activists are pushed by police to the railway station

In contrast to the elistist WEF the WSF, the World Social Forum, just has been taking place in Mumbai, India with a week of meetings, speeches, protests, cultural events.
"The World Social Forum (WSF) was created to provide an open platform to discuss strategies of resistance to the model for globalisation formulated at the annual World Economic Forum at Davos by large multinational corporations, national governments, IMF, the World Bank and the WTO, which are the foot soldiers of these corporations. [WSF 2004]
The WSF, an assembly of more than 100000 social activists, exists as a week of workshops, protests, and events. In this week it has addressed thousand of issues such as child labor, indigenous struggles, homelessness, the G-20, art and resistance video, queers and sex workers, the coca cola boycott, songs and more songs of resistance, linking rivers, South Korean migrant workers, the dalits [es] (untouchables), testimonials about the dowry system, and a poetry book released for the forum.

For more information, see India Indymedia and a collection of articles from IPS.