A talk and video by Martin Shaw who was almost killed when police cut his climbing ropes at the G8 summit last year. 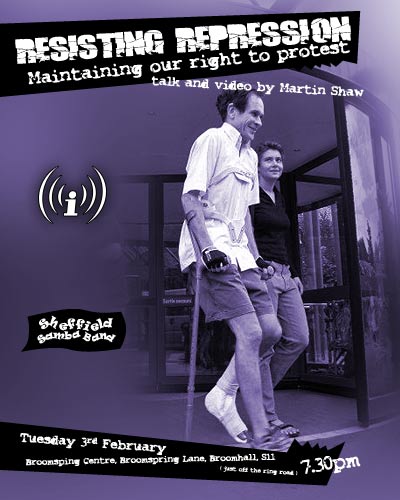 One month after the incident Martin Shaw finally leaves the Swiss hospital.

"The plan was for Gesine and I, both very experienced climbers, to be suspended off either side of the bridge, on a single (but very strong) specialised climbing rope. To do this, the rope had to cross the carriageway, effectively creating a road blockade on the bridge with the rope to which we were attached (...) Ten of them slowed and stopped the traffic, using banners explaining that if they continued to accelerate, they could kill the two climbers. (...) As soon as the traffic came to a stand still, the climbing assistants gave Gesine and I the signal to begin. I pruseked up as Gesine abeiled down; we served as a counter balance for each other. (...) I could never have fathomed that anyone would touch the ropes by which you hang. But then I felt the rope as it was cut. During my fall of 25 meters I thought, "Oh my God, they cut the fucking rope" ...


In June 2003, during the G8 meeting in Evian, Martin Shaw barely escaped death when the Swiss police cut the rope he was hanging from in an attempt to blockade delegates attending the summit.

Martin is touring the UK with a video of the incident and discussing the wave of both legal and physical repression that has been sweeping across the world in recent years.

From Gothenburg to Genoa, to Thessaloniki, to last night in your neighbourhood, this was just one more incident of repression and police impunity.

What should we be doing about it - as individuals, as affinity groups, as communities, as networks?

What new 'anti-terrorist' powers are the UK and EU governments taking and how might they affect you? What sort of tactics might the police be using for the G8 meeting in the UK in 2005?

What are 'communities of resistance', and what are the most practical ways that we can support each other when such repression happens amongst us?


For more information about the tour email Martin at: