Mexican armed forces have attacked the Chol indigenous community of Nuevo San Rafael, burning down 23 houses and violently evicting the inhabitants, who are Zapatista sympathisers. The attack, reported variously as happening on either 19 or 22 January, took place in the remote Montes Azules jungle area of Chiapas.

Resource-rich Montes Azules has long been coveted by multinationals. As the governments and multinationals press forward with the Plan Puebla Panama and Free Trade Area of the Americas, the “war of low intensity” against the thousand-plus Zapatista autonomous communities erupts into blatant repression. The Secretary of Government of Chiapas, Rubén Velázquez López, promises more evictions, declaring that land invasions will no longer be tolerated.

The fate of the inhabitants of Nuevo San Rafael is unknown, as the army is preventing reporters and human rights observers from entering the area. Local indigenous Chol, Josué Jiménez Cruz, has been arrested, and is apparently imprisoned in the town of Ocosingo. International solidarity activity is vital, declare Zapatista solidarity groups. Protesters call to ring the Mexican Embassy in London on 0207 499 8586 (open 9am-6pm)

Protest letter in Spanish by the Gruppe B.A.S.T.A.
Indymedia Chiapas 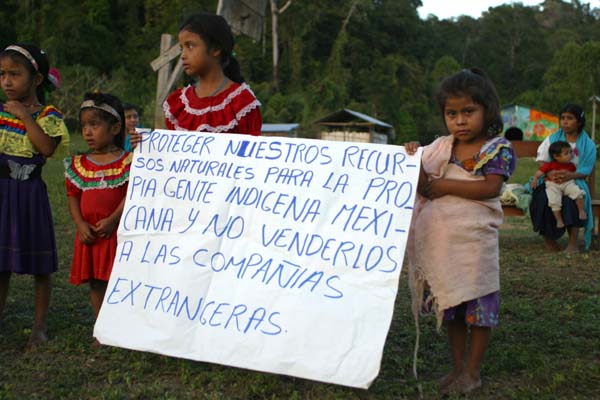 "Protect our natural resources for the real indigenous people of Mexico"

According to the testimonies obtained by The Human Rights Centre Bartolome de las Casas, 23 houses of the community were burned and at the moment 40 Marine and Police officers remain in Nuevo San Rafael. The inhabitants of this community, also known as Ignacio Allende, are indigenous Choles, refugees who had to flee from Calvario, municipality of Sabanilla in the north of Chiapas, two years ago. See Rport

The Human Rights Centre “wholeheartedly condemns the way in which the communities are being held incommunicado” and the “violation of the right to travel freely in the Montes Azules region” by the state authorities and the Marines.

The Chiapas State forces have also evicted hundreds of peasants in the OPEZ organisation from 2 occupied estates in Suchiate, near the border with Guatemala. The Mexican daily La Jornada reports on 25 January:
“The high season for the eviction of campesinos has begun. The government of Chiapas has resolved to persecute land invasions, even those going back as far as 11 years, as happened yesterday in the estates Los Cerros and Los Cerritos in Suchiate, near the border with Guatemala. The lands were returned to their legal owners, that is the real estate company Las Cruces and the private persons Guadalupe Barrios, Arturo Barrios and Roberto Ocampo.”

“The (Chiapas)Secretary of Government, Rubén Velázquez López, the author of this escalation, declared yesterday that "this government will allow no more invasions", but he pointed out, "it will excel in guaranteeing that human rights are respected" during the evictions.” See http://chiapas.mediosindependientes.org/print.php3?article_id=107125 In the nearby village of Nuevo San Isidro, also in Montes Azules, indigenous Tzotzil villagers fear an imminent eviction attempt and are mounting guard, day and night. Military planes and helicopters fly overhead. "We do not want anything from the bad government. Here we are going to resist. We are ready to spill our blood for the sake of our children," said one of the men of the village. On the village jetty - these remote parts are only accessible by boat or by helicopter - are two signs. "Community in resistance" and "Entry Forbidden to Government Officials". While not formally part of a Zapatista autonomous municipality, the villagers are sympathisers with the rebel movement.

In Montes Azules 110 Zapatista villages and settlements are threatened with eviction. The Mexican government cites conservation concerns in the Biosphere Reserve.

The real reason is the economic and strategic interests of transnational corporations and the USA and Mexican governments - the Plan Puebla Panama aims to "develop" southern Mexico and Central America, exploiting natural resources like biodiversity and hydro-electricity and driving peasants off their land into sweatshops.

Meanwhile in the north of Chiapas the Zapatista committee of good government has denounced a state of siege from the military, the situation remains tense at the threatened Zapatista caracol of Morelia and further north in the state of Morelos repression continues against the community of Tlanepantla, where the people declared themselves autonomous.

One thing is certain. The Zapatistas will not give up their autonomy, won with their own blood. Br>
"A SHADOW of death is being raised in the heart of our land, of our mother, of our forest. A cloud of soldiers, paramilitaries, plans and projects is coming once again to threaten us, to rob us of our dream and to evict our indigenous communities.... But we are not going to permit eviction, nor the relocation of our communities, we are going to defend them with everything we have in our hands.." : so declares the Zapatista autonomous municipality of Ricardo Flores Magon, speaking from Montes Azules, deep in the Lacandona jungle.
See Communities in Resistance

Ongoing coverage in English and Spanish at Chiapas Indymedia