On January 30 [Will+Dave] will be charged for painting NO WAR in 5m high blood-red letters on the Sydney Opera House [..] Now the state authorities are [..] threatening a jail sentence of 5(!) years, plus charging an outrageous A$151,000. [..] Green Left Weekly spoke with Dave Burgess about the "very real prospect of going to gaol" (so Judge Blackmore) [..] 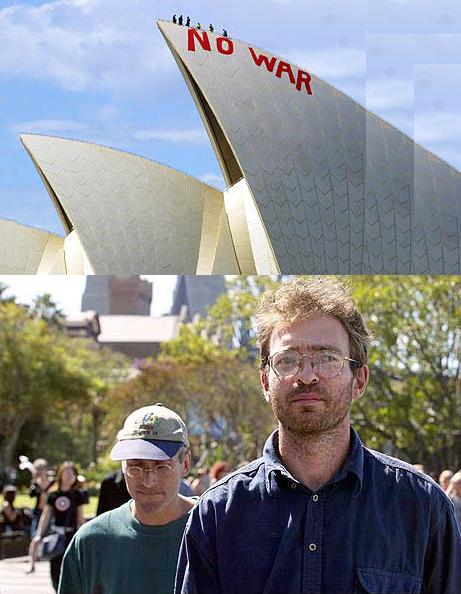 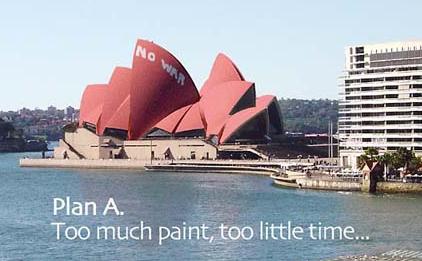 Will Saunders (left) and Dave Burgess 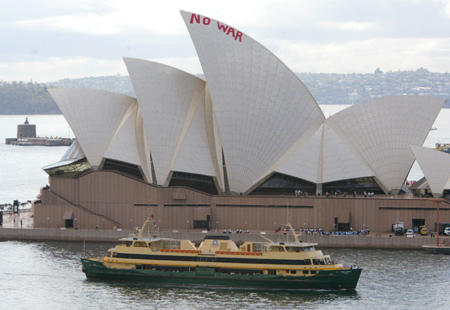 [
Find the Call for rally & support and more PICS @

NO WAR against Opera House beautifiers

On January 30, Dr Will Saunders and Dave Burgess will face their second sentencing hearing at the Sydney District Court. These true heroes of the anti-war movement are charged with "malicious damage" for painting NO WAR in 5m high blood-red letters on the Opera House - two days before Bu$h, B.liar, and HoWARd started bombing Iraq back to stone age on March 20, 2003. The pictures were shown on prime time news all over the world, thus assuring that the world knows that Australia is part of the "Coalition of the killing".

Now the state authorities are trying to make an example of this direct action by threatening a jail sen-tence of now up to 5 (!) years, plus charging an outrageous A$151,000, allegedly the costs of the clean up. On December 11 last year, bolstered by 200 enthusiastic, rallying supporters, they faced their first hearing. Green Left Weekly spoke with Dave Burgess about the "very real prospect of going to gaol" (so Judge Blackmore) and the campaign for a "Fair Go for Will and Dave".


GLW: I heard, you were not allowed to defend yourself. Why?

When Will and I climbed the Opera House, we were doing everything we could to non-violently prevent our countries’ involvement in an illegal war. Prime Minister Howard had described the million or so people who marched on February 14-16 as a "mob" and a banner drop off the Opera House the previous month gained no media coverage whatsoever. Ours was an eleventh hour, last resort action and we did it without any malicious thought in our bodies.

However, the Court ruled that the law did not apply extra-territorially and also that the nexus between the Sydney Opera House and Australia’s war on Iraq was not a strong one – despite the invaluable propaganda success and impact of that action – and thereby ruled all our evidence inadmissible. So although pleading "not guilty", we were unable to present a defence case.


GLW: Do you know of any successful use of that law?

Oh yes, there was an incident that occurred at the Sydney Cricket Ground in 1973 when unionist and anti-apartheid activist Bob Pringle attempted to chop down the goal posts prior to a rugby test between the South-African Springboks and Australia. That case was indeed won on appeal on the basis of "self-defence".


GLW: Why, do you think, they are cracking down so hard on you? And what is so outrageously expensive about cleaning up those 5 letters?

While we certainly held no illusions about getting away with it, there has been an incredible level of bitterness directed towards the case from the NSW Government’s point of view. Obviously our main game was to get the message up there and a side issue to that was the "security breach" of a site that Bob Carr had supposedly tightened up. The banner drop only 6 weeks previously sparked an outcry about lacking security for this national icon and the Harbour Bridge. So for people like Carr (4 days out from a State Election), Opera House representatives and anti-terrorism officials, the whole thing was a huge embarrassment.

I’ve noticed that the mainstream media consistently refers to what we did as an “attack”. Now, to me, September 11 or an invasion of another country based on false pretexts is an attack, but certainly not painting a building. Back in June, we were granted a six-week adjournment of court proceedings to see if we could sit down with the Opera House and see what could be sorted out without all these court dramas. However, they refused to talk point blank. The Opera House CEO, Norman Gillespie, used the Financial Review last year to blame Will and me personally for all of the Opera House’s extra security expenses. But weren’t these extra security measures meant to be in place anyway?

As far as the clean-up goes, there is a mire of invoices that have to be gone through. The Opera House dropped the figure from $166,000 to $151,000 at the first hearing because they don’t pay GST. I don’t know why they were charging us with that in the first place. It also emerged that the abseilers, who were probably paid about $25 an hour, were hired out for about $90 per hour. But then the company that hired out the abseilers was sub-contracted by another company at $150 an hour who then simply "marked up" the price to $190. This money is by far the largest component of the bill we face.


GLW: I heard some anecdotes about spontaneous Opera House staff reactions about your action and arrests. Can you elaborate?

Well, after being escorted by the Rescue Squad through the inside of the sail, we then walked over the top of the Concert Hall where the orchestra was rehearsing. By the time we reached the loading dock, the orchestra had stopped and was applauding us into the paddy wagon. I’ve also heard that there was animated discussion within some staff members there to blockade the clean-up operation – so much for the strong anti-war feeling and moral support at that time.


GLW: What response and how much support did and do you get – here and internationally?

It was amazing and quite overwhelming. To see or hear of the image being on the front pages of newspapers in places like Japan, Syria, China and Bolivia and the stories on BBC, CNN, everywhere, plus all the interviews. That was quite beyond what we had envisaged. The good thing about that was that the pictures were accompanied by captions saying that most Australians were opposed to the war and our country’s involvement. We got letters from everywhere saying thank you and a few, mainly from the US military, saying f*#@ you! But the main message of support we received was from ordinary people saying that we had made them smile on a very sad day (on March 18, Bush announced the final 48-hour ultimatum) – a day where we all felt so powerless. In terms of the charges and compo bill we face, obviously my three pro bono legal representatives have been fantastic, the Stop the War Coalition for all the organising of support at our court appearances and the Greens have been great as well on the parliamentary level. We could still do with some help from other potent organisations like the unions and other peace groups in this country.


GLW: Any other anecdotes?

Something strange or out of the ordinary seems to happen every week. Winning last year’s WINK award (Wired Inventive Naughty Kids, by techno-band Biftek) for our action was pretty surreal. So too has been being photographed for the Australian Photographic Portrait Prize and getting painted for the Archibald.


GLW: After all that trouble they force on you, do you regret your action?

The final straw for me during the build-up to war was Howard calling all those people who marched a "mob". Will and I both thought very hard about it for a day or two leading up to the action. I knew that once we started climbing that there was no going back and recriminations would follow. I felt the world needed to see that message written there to know how this country’s people felt about the whole situation. So no, I don’t regret it at all. Having said that, the feeling in my heart as we approached the building was one of immense sadness for what was about to happen in Iraq and all the lives it was going to ruin.

The only thing I regret now is that having spent all of my adult life working for community, environment and social justice issues, to many people now, I am only known for an action that took less than an hour to complete. And I am forced to spend nearly all my time protecting my own self from some pretty nasty characters. It’s time lost from issues I am really passionate about that bothers me most. But in the scheme of things, it’s important to fight this case, too.


GLW: So support Will and Dave by joining the protest on Friday, January 30 at 9am at the District Court, Downing Centre, corner Elizabeth/Liverpool Sts, Sydney. Spread the message, buy Opera House postcards, donate to the clean-up fund – details on

Check out Will & Dave's first sentencing hearing rally on December 11 @

Both Dr Saunders’ & Mr Burgess’ defence statements can be read @

Send messages of solidarity to

Subscribe to the very low-volume email list of the Sydney Stop the War Coalition. Send an email to

Stop_the_War-subscribe@yahoogroups.com
or fill out the top right corner of the NEW(!) StWC website @