The Hunt Saboteurs Association has hit out at the Countryside Alliance for misleading the media in an allegation that a hunt master was dragged from his horse at the Old Surrey Burstow and West Kent Hunt. The HSA Press Officer commented on this allegation saying: "From what I can ascertain, the Hunt Master Mr. Worsley was trying to whip protestors when his horse reared up. He lost his balance and fell off. He then carried on to attack saboteurs joined by other members of the hunt. Typically the Countryside Alliance have only told half the story in order to misrepresent hunt saboteurs - as usual, it is a case of 'if you sling enough mud...'

The week before a hunt saboteur was taken unconscious to hospital with head injuries and bruising to his body after being ridden down at the Crawley and Horsham Hunt, also in Sussex. In recent weeks, Sussex police have been throwing huge police resources into targeting anti-hunt protestors whose 'crimes' are to spray harmless scent dullers, shout and blow hunting horns. 'Turning a blind eye' is a phrase gaining increasing currency when talking about Sussex Police as they are seemingly indifferent to any law breaking or violent behaviour carried out by the hunt. 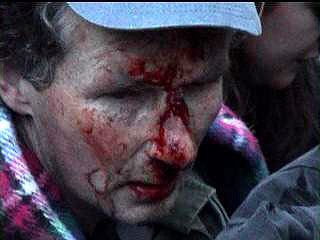