On 31 Jan 2004, the first European day of Migrant Struggles took place simultaneously across Fortress Europe in 11 countries and 49 cities, see the noborder web site and the round-up on the global indymedia site for an overview of the actions, and click here for a round up of actions in Europe.

At Lindholme Detention Centre, near Doncaster, there was a noise demo: timeline | photos | videos.

In London, there was a No Borders Protest at Waterloo Station and on Friday a Anti-Daily Mail Demo at which there was a counter, pro-hatred, BNP demo. In the evening there was a post demo party at Kentish Town Social Center.

A short video of the waterloo station action and the adbusting actions of the previous nights has been produced. Note how happy the eurostar staff were to collect up our leaflets in order to deny others access to it.

At Campsfield there was a small protest as part of the 10 in the UK. In Manchester there was a poor turn out.

In Athens 3,000 people marched on an anti-racist demo. 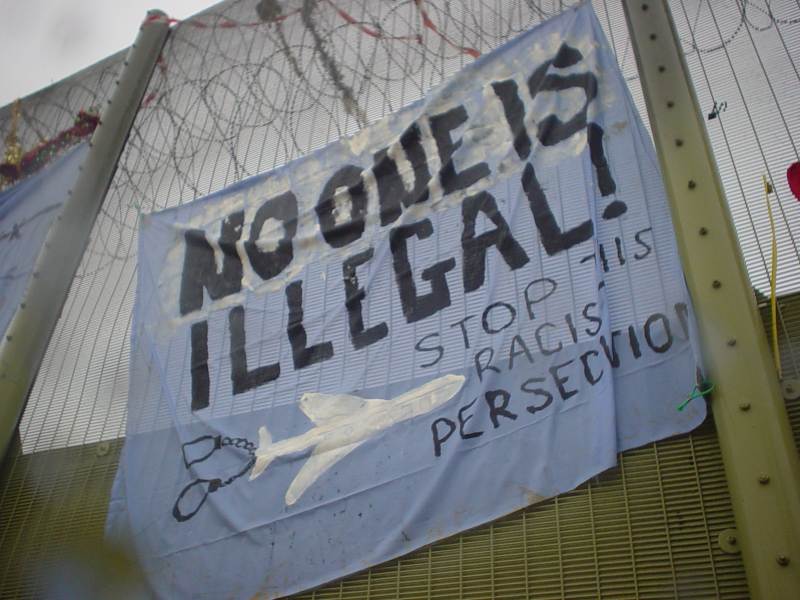 No One Is Illegal

A summary of European actions is on the noborder website.

Across Europe, from France and Spain to Austria, Italy and Germany [1 | 2].

This "European day of struggles for the regularization (of sans papiers) and for the closure of all detention centers for foreigners" has been agreed in a series of meetings, see the common declaration. The day will be reported on a dedicated website.

In Britain, where a "No One Is Illegal Manifesto" has been launched last year, five demos are being held [1 | 2]: On Friday 30 Jan in London at Parliament and the Daily Mail, on Saturday 31 Jan at Hull Detention Center, Campsfield Detention Center, a mass leaflet at Waterloo Station, and a noise demo near Lindholme Removal/Detention Centre.