Up at camp today - Costain seem to be unsure how to deal with determined activists in the Welsh Valleys. Monday will be a crucial day, they have brought in a big mechanical digger, trees and habitats will be destroyed forever - anyone free please try to get there now! Call 07952 774525 for details of location etc. 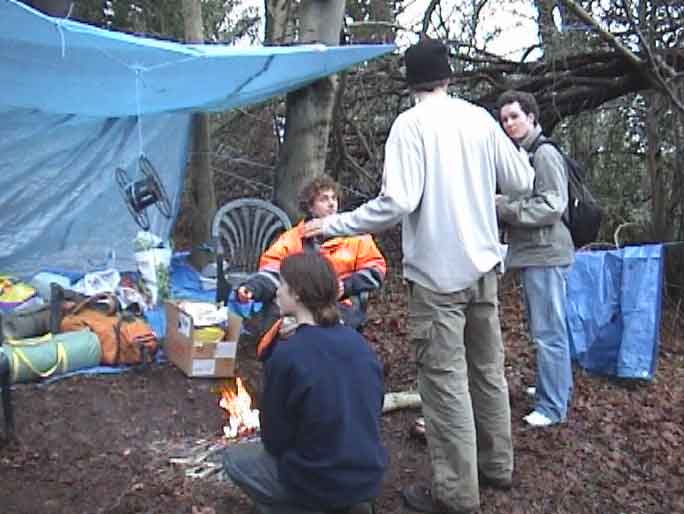 "People needed to stop work on the Blackwood Bypass near Caerphilly. The
site is accessible from the town centre of Blackwood where amazing ancient
woodland is being cut down NOW for a two mile feeder road to an expanding MOD
site (building hi tech bits for bombers etc).

Work has been stopped by a few people getting in the way of two or three
chainsaws for several days running despite heavy rain. Only scrub has been
cleared so far and if we move quickly we can slow/stop work down and build up
defences quicker than they can trash the place. A camp is in the process of
being set up to support people arriving to get in the way of our old enemies
Carillion (the arseholes formerly known as Tarmac) and Costain. Resources are on
the way but this needs support now.

Strong local support- this road is blasting through amazing woodland and right
up against residential areas. Road was contested at public inquiry and has been
campaigned against for ten years- currently awaiting verdict for European Court
appeal- unsure of grounds but probably to do with SSSI status and two bat
habitats on route. This is the usual sickening story - the trashing of yet
another beautiful place, the ignoring of all existing environmental legislation
and the environmental and social and even economic evidence about how
destructive and counter-productive roads are on all levels.

The links from road building, via our oil- fuelled capitalist economy, to war
and climate change are made even clearer by the fact that this road is being
built for MOD expansion, to help our glorious leaders win the war on terror by
bombing the crap out of the middle east - aargh! The proposed road (PFI) is
costing the Welsh Taxpayer 56 million pounds (28 million per mile) and is a
prime example of the sustainable development Wales has a constitutional
commitment to - not!!!!

Come on dust off your waterproofs and polish your harness, we know nine ladies
needs ya too!