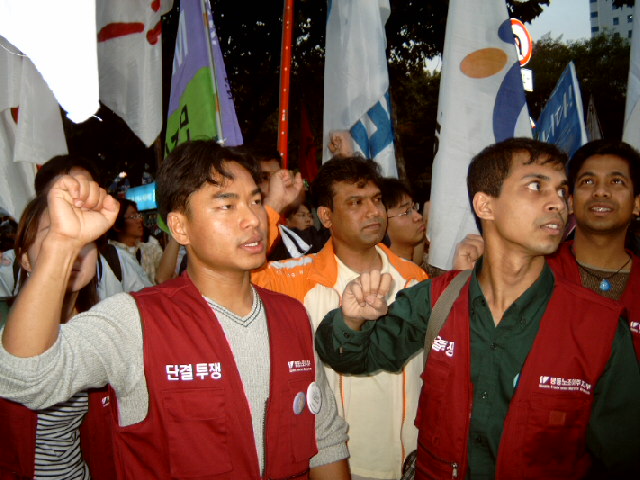 Samar on one last year's anti-war demonstration in Seoul

Yesterday, February 15, struggling migrant workers could celebrate exactly three month of Myeong-dong Sit-in Struggle Collective (MSSC) - since Nov 15 last year migrant workers and there Korean supporters are occupying Myeong-dong Cathedrals compound to protest against South Korean government’s policy of manhunt and mass deportation - and Immigration Office wanted to make a special birthday present. At noon 12:35 four Immigration Officers captured Samar Thapa, the chief of ETU-MB’s (Equality Trade Union – Migrants’ Branch) current Emergency Struggle Committee. Samar Thapa just wanted to meet activists from the Philippines when he was attacked and captured by Immigration Officers by using extreme force to get him in the waiting car. It is to assume that Immigration Office or police bug his telephone, because already the night before Samar Thapa made the appointment with the Philippine activists.
Other activists of MSSC only few minutes from him away had a street propaganda action on the Philippine Marked in Hyehwa-dong. They collected signatures against the voluntarily self-deportation the South Korean government demanded from all so-called “illegal” migrant workers. Actually after the meeting with KASAMMAKO (Filipino migrants community) activists Samar Thapa wanted to join the propaganda action. Of course ETU-MB and MSSC are strong demanding the immediate release of Samar Thapa, the Immigration officers directly brought him to Yosu Deportation Prison Center near port city Busan in the south of the Korean Peninsula, but also the release of the other MSSC members, Kul Bahadur Yakha and Enamul Haq, now since more than one month in deportation Prison. Of course ETU-MB sees this newest attack as a direct action to smash migrant’s trade union and the whole migrant workers movement.
Directly after the bad news became known the Korean MSSC members, supporters and the international secretary of ETU-MB went to Mokdong Immigration Office to protest against Samar’s abduction. During the rally it came to a short clash between the demonstrators and riot police, numerous present on the spot.
Last week Korea Times wrote: “Lim (an official at the Residence Control Division of the Justice Ministry) said the Justice Ministry will carry out joint efforts with the National Police Agency to crack down on any illegal aliens in the country starting next month.” According to the International Secretary of ETU-MB it is as a direct warning to the address of the struggling members of MSSC and all migrant workers in South Korea, refusing to leave voluntarily the country.